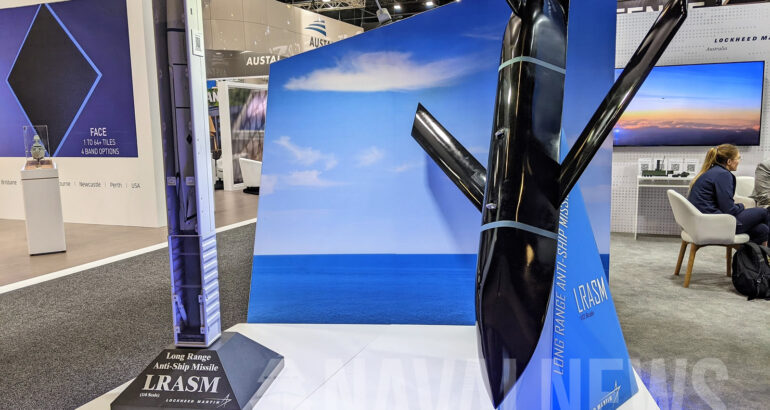 During INDO PACIFIC 2022, Naval News had the opportunity to talk to Lockheed Martin Australia about the future of LRASM ‘down under’.

LRASM is designed to detect and destroy specific targets within groups of ships by employing advanced technologies that reduce dependence on intelligence, surveillance and reconnaissance platforms, network links and GPS navigation in electronic warfare environments.

The AGM-158C is derived from the Joint Air-to-Surface Standoff Missile Extended Range (JASSM ER). An anti-jam GPS guidance system, radio frequency sensor (RFS), and an infrared sensor support guidance and targeting. Once launched, LRASM guides to an initial point and employs onboard sensors to locate, identify, and provide terminal guidance to the target.

Armed with a 1,000 Lbs (454 kg) penetrating blast fragmentation warhead, LRASM is low observable and has a range likely comparable with JASSM ER (around 500 nautical miles).

LRASM Achieved EOC with the U.S. Navy’s F/A-18E/F Super Hornet in December 2019 and may soon find its way aboard the B-52 bomber of the U.S. Air Force. The U.S. Navy conducted a live firing of a LRASM during Valiant Shield in September 2020.

Up to 200 LRASM for the RAAF’s Super Hornets

In 2020, the Royal Australian Air Force (RAAF) selected LRASM for integration aboard its fleet of 24 F/A-18F Super Hornets, as part of Project AIR 3023 Phase I. Lockheed Martin told Naval News that efforts to integrate the weapon is going well, earlier this year, they received a $49mn contract to integrate LRASM Lots 4 and 5 aboard Australia’s Super Hornets.

According to the integration contract all relevant works will be completed by March 2026.

Lockheed Martin declined to comment on how many missiles Australia is procuring, referring Naval News to the Department of Defence, however, a 2020 congressional notification approved the sale of up to 200 missiles to Australia.

LRASM for Anzac, Hobart and Hunter classes of ships ?

Currently, LRASM-SL uses an MK-114 booster, taken from the RUM-139 VL-ASROC, to facilitate vertical launch from MK41 VLS cells. We were told that this booster is oversized for the weight of the LRASM. In addition, Naval News understands that the weight and size of the MK-114 booster may prevent integration aboard the Royal Australian Navy’s Anzac class frigates, which is a requirement of SEA 1300.

A new bespoke booster for LRASM-SL, which Lockheed Martin is developing with Thales Australia, may help solve that problem by reducing weight and shedding excess capability. Currently, MK-114 boosters are jettisoned prior to flame out during LRASM-SL launches, something that the new booster will not do. If the development program is successful, Naval News understands that Thales Australia may build examples of the bespoke booster for other LRASM-SL customers.