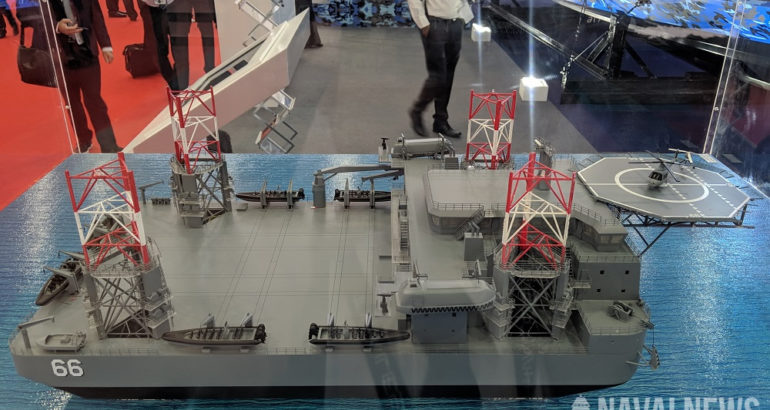 At LIMA 2019, the Langkawi International Maritime and Aerospace exhibition, Malaysian company Muhibbah Engineering is showcasing its Mobile Offshore Base project.

Muhibbah Engineering leveraged years of know-how and experience in the oil & gas offshore field to come up with its Mobile Offshore Base (MOB) concept.

The MOB would act as a forward operating base (FOB) which can be deployed to an area of interest, delivering extended range of operation, logistics and coverage supported by various sensors. Sensor suites may include long range maritime surveillance radar, electro-optic system, air surveillance radar… The MOB comes with a dedicated combat information center (CIC) which can be linked with (and deploy) various platforms such as autonomous vehicles, helicopters and fast interceptor craft.

The MOB can be deployed (under its own power, or towed by tug boats) to an area with a maximum water depth of 100 meters. The leg are 135 meters long. In case of high sea states, the MOB can be raised above sea levels and sea swell.

According to its designer, the MOB provides an effective and real time C4ISR (Command, control, communications, computers, intelligence, surveillance, reconnaissance) therefore increasing the situational awarness capability to security forces. The idea behind the concept is to support maritime operations where conventional land bases are not available.

Missions of the MOB include sea control, search and rescue, air defense (with containerized launchers), disaster relief, forward logistics operations… The platform can accommodate 150 military personnel in normal conditions, and up to 420 people in disaster relief configuration. 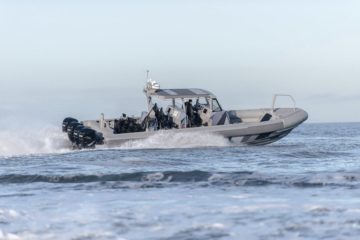 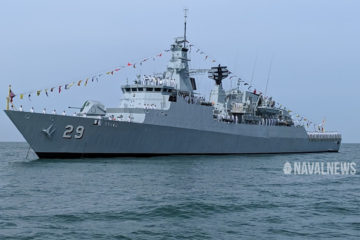