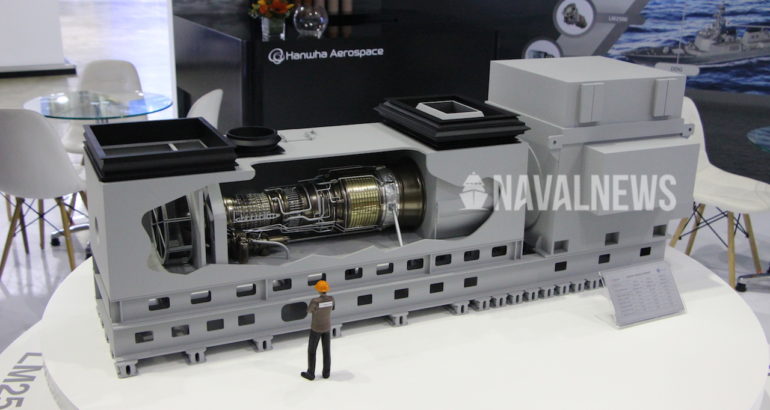 GE's gas turbine and electric drive power and propulsion systems are proven to meet the most demanding needs of world navies. Today at the MADEX International Marine Industrial Defense Exhibition, GE is highlighting its power and propulsion capabilities as they apply to two new proposed Republic of Korea (ROK) Navy programs: the KDDX destroyer and the LPX-II amphibious assault ship.

For the 8,000-ton ROK Navy’s KDDX destroyer, GE offers proven solutions for the two considered propulsion configurations: HED or IFEP. The HED system would use the 3.4 MW shock tested motor designed for the United Kingdom Royal Navy’s Type 26 frigate. The IFEP system would be nearly identical to the electrical system GE designed for the U.K.’s Type 45 destroyer. Both propulsion systems would use dual GE gas turbines to meet survivability and efficiency needs.

“Whether HED or IFEP is selected, GE is proposing proven equipment. Our HED motor is the right size motor for KDDX and GE is the only manufacturer to build a naval motor over 2.5 MW. “

“The IFEP is an attractive solution to satisfy the larger and ever-increasing power demands of weapons and radar systems and when operational flexibility and efficiency are important factors. GE’s IFEP solution uses fourth generation advanced induction motors, shock-proof drives and our generator – coupled to a reliable GE LM2500 gas turbine – to provide a low-risk, fully compliant solution,” says Andy Cooper, U.K. Managing Director of GE Power Conversion. “The KDDX IFEP solution with our electrical system integration expertise is a natural first step as the ROK Navy progresses to a scaled-up IFEP system on the larger LPX II ship,” Cooper stated.GE is the world leader in IFEP solutions and can leverage past programs including the U.K. Royal Navy Type 45 destroyers and Queen Elizabeth class aircraft carriers, and the United States Navy’s DDG 1000 destroyer.

GE’s IFEP solution for the ROK Navy offers a ship with superior operational flexibility and fuel economy, power for future growth and optimal survivability/redundancy by using two right-sized gas turbines. For nearly 30 years, GE has supported the U.K. Royal Navy with HED technology; collaborations include the pioneering Type 23 class in the 1990s and now the HED system for the Type 26 Global Combat Ship.

Complementing its engineering capability is GE’s Marine Power Test Facility which is the only commercial land-based facility in the world capable of full-scale testing of integrated navy systems and ship architectures.

GE’s power dense marine gas turbines offer best in-class reliability with low lifecycle costs. GE’s lightweight composite module recently received full qualification from the U.S. Navy after completion of a series of tests including barge shock testing. Compared to its steel predecessor, the new gas turbine module offers a weight reduction of over 2,000 kg, elimination of corrosion, is 60% quieter, and has wall temperatures that are 25°F to 50°F degrees cooler.