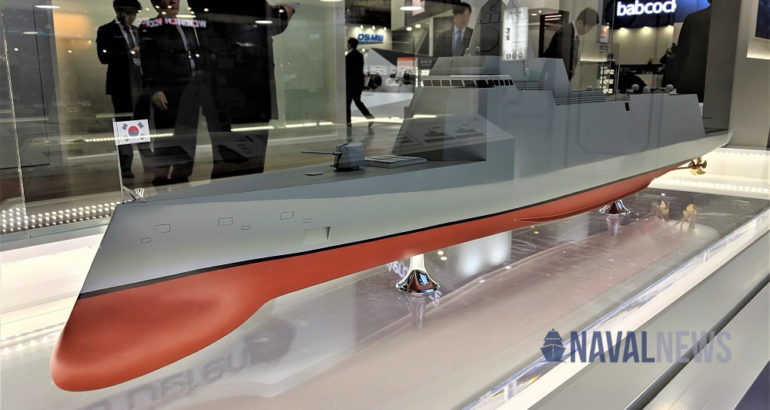 At MADEX 2019, the maritime defense exhibition which opened its doors today in Busan, South Korea, local shipyard Hyundai Heavy Industries unveiled the design of its KDDX.

KDDX is an upcoming requirement for the ROK Navy.

The formal requirement has not been issued yet, therefore HHI design is based on their experience and know how acquired in previous ROK Navy programs.

HHI’s KDDX is available in several configuration such as 3 different bows:

HHI compared the benefits and comprimes of each bow type and found that the third option (inverted bow, similar to DDG 1000 of the U.S. Navy or the future frigate of the French Navy) offered the best advantages. The same bow design was adopted for a concept ship unveiled by HHI at MADEX 2019 as well.

HHI’s KDDX is 156 meters in length with a beam of 19 meters and a displacement of 6,500 tons. As far as weapon systems are concerned, HHI told us the design is fitted with 8x anti-ship missiles, 48x K-VLS forward and 16x K-VLS II aft. K-VLS II by Hanwha will be able to deploy new generation of missiles such as a new land attack cruise missile in development. On top of the helicopter hangar is a next generation CIWS currently in development with South Korea’s Agency for Defense Development (ADD) and which will be called “K-CIWS”. Naval News also learned last week during ADEX 2019 that the KDDX is set to feature a BAE Systems’ Mark 45 5 inch main gun with the new automated handling system (set to be installed first aboard UK’s Type 26 frigate). There are two helicopter hangars able to accommodate either Wildcat or MH-60R.

For sensor systems, KDDX will feature a new generation integrated mast. According to our information, HHI has entered a partnership with Hanwha Systems and their ship design show Hanwha’s I-Mast. HHI’s competitor for KDDX, DSME is negotiating with LIG Nex1 for a similar type of partnership. We will focus on each integrated masts in a different article. The other major innovation of the KDDX for sensor is the integrated sonar system: It is a next generation ASW system combining a hull mounted sonar and a towed array sonar.

The crew complement will be between 160 to 180 sailors. The ship will benefit from HHI latest “Smart Ship” technologies.