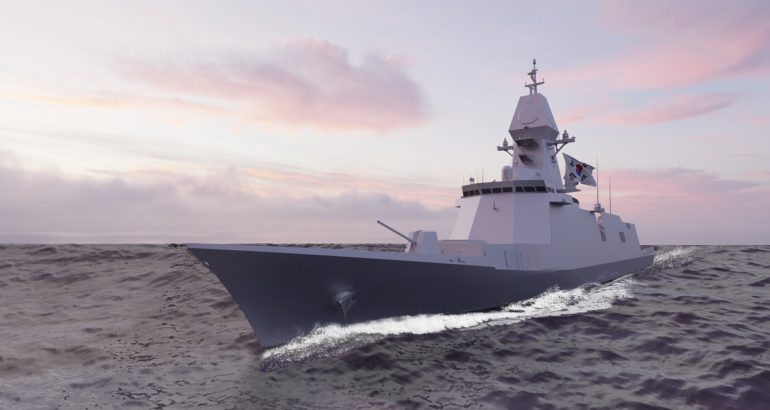 Hyundai Heavy Industries (HHI) succeeded in winning an order for the latest frigate of the Republic of Korea Navy (ROK Navy). HHI announced today that it signed a contract for detailed design and construction of the 3,500 ton FFX Batch III frigate worth a total of 400 billion won with the Defense Acquisition Program Administration (DAPA).

The frigate, measuring 129 meters in length, 15 meters in width, is scheduled to be constructed at HHI’s Ulsan shipyard and to be delivered in 2024.

The vessel with maximum speed of 30 knots features a dramatic improvement in its anti-aircraft defense capability compared to the existing Ulsan-class frigates by a four sided fixed multi-function phased array radar capable of 360 degrees omni-directional detection, tracking and engagement.

The frigate with hybrid propulsion system can avoid detection from submarine by applying electric propulsion system that produces less noise. In an emergency, it can operate at high speeds using gas turbine; thus, significantly enhancing its operational capabilities.

“We are honored to be in charge of designing and building the latest frigates that will play a pivotal role for the Republic of Korea Navy. Based on successful development experience of Ulsan-class Batch-III Frigate, HHI vows to accelerate the development of the next generation indigenously developed Korean Aegis Destroyer called KDDX.”

Since the delivery of the first Korean-built frigate ROKS Ulsan in 1980, HHI has played a pivotal role in the modernization of ROK Navy designing major warships. And evidently it now expands its service to worldwide navies with advanced, affordable warships.