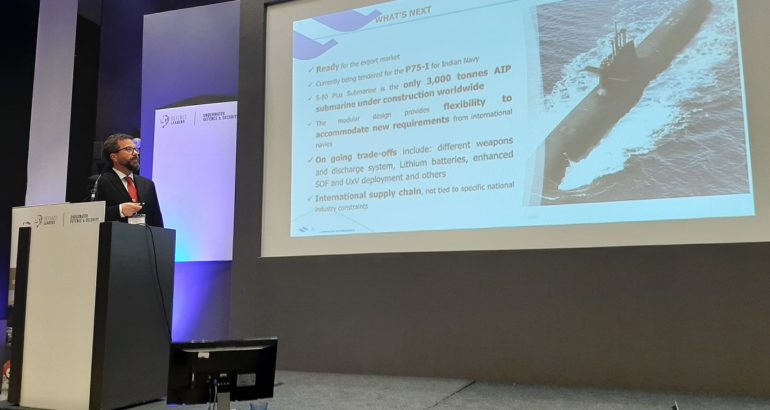 Navantia has participated in the "Underwater Defence & Security 2020" Conference, organized by Defence Leaders, that took place in Southampton, in London from 3-5 March.

The Cartagena shipyard Engineering Director, Germán Romero Valiente, made a presentation of the characteristics and capacities of the Spanish S80 Plus submarine, which is a unique product in the international market for its size and capacity, thanks to its AIP system.

This edition of UDS has had a record participation with attendees and lecturers from 36 countries, and in this occassion Navantia has been able to report on progress of the S80 Plus submarine program, both from the constructive point of view, as of a robust design that makes it suitable for export.

Currently, the first submarine in the series has passed the hull closure milestone and is scheduled to be floated at the end of this year 2020, tested during 2021, and delivered to the Spanish Navy in 2022.

The  AIP (Air Independant Propulsion) system has been developed specifically for the project by the Spanish company Abengoa (bioethanol  reformer) and the American Collins Aerospace (fuel cells). The AIP system is much more versatile and efficient than others on the market. Among other advantages, it uses an agricultural bio-ethanol, available internationally, fuel cell membranes require half the maintenance of the market standard, and its efficiency allows it to operate for periods of up to 3 weeks underwater.

The S-80 Plus submarine is a last generation highly technological product, whose versatility allows the export. Currently Navantia is offering a design derived from this submarine to the Indian Navy, for the P75(I) program, for design and construction of 6 units.

As well, Navantia was also invited to a panel of experts where future trends in rescue and underwater rescue were discussed.

The Indian government shortlisted in January 2020 two Indian shipyards and five foreign defense companies for the P-75I project which calls for the local construction of six conventional submarines.

The two local shipyards that were shortlisted are the privately owned L&T group and state-owned MDL. The five foreign defense companies are:

The S80 class (or Isaac Peral class) are AIP (air independent propulsion) submarines currently under construction for the Spanish Navy. Four boats have been ordered, all are under construction by Navantia at its yard in Cartagena. Construction of the submarines had been suspended in early 2013, when it was found that the first submarine in the series, the Isaac Peral, was 75 to 100 tons too heavy relative to its length.

General Dynamics Electric Boat was brought in by Navantia through a Foreign Military Sale in 2013 to tackle the weight distribution issues. Each submarine has been stretched with a 10 meters ring to better distribute the weight of the submarine, giving them the new “S80 Plus” or “S80 Flight II” designation. The intended delivery date of the first submarine is December 2022.

The AIP System is based on a fuel cell, which uses hydrogen produced through bioethanol and oxygen processing to generate electricity, allowing the submarine to sail for weeks without surfacing. The first submarine that will have this operating system will be the S83, “Cosme García”. The AIP system will be installed in July 2021. The submarines S81 and S82, currently under construction, will be upgraded with the AIP module in their first scheduled major overhaul period.

Note: The above slides were presented by Navantia during an industry briefing to the Dutch industry in November 2019, as part of their bid for the Dutch Walrus-class replacement program.