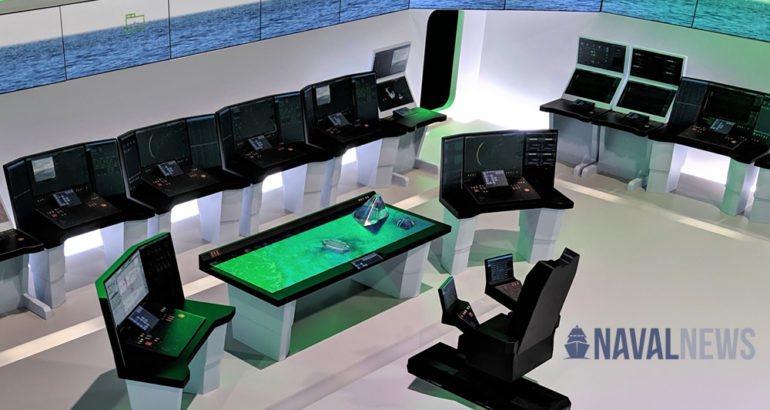 The future Combat Information Center (CIC) and its Combat Management System (CMS) were being showcased to select VIPs, behind closed doors, on the LIG Nex1 booth during the show.

Naval News got a special clearance to access this room and even to film (see at the bottom of the page) the CIC concept for the KDDX. KDDX is an upcoming destroyer program for the ROK Navy in which the two major Korean shipyards, DSME and HHI are competing, each with their own designs. As for the ship design, there is also a competition for the CMS and the integrated mast of the future surface combatants. LIG Nex1 is competing against Hanwha Defense for systems. The Korean Ministry of National Defense is expected to issue a basic design contract to one of the two shipyards next year for the KDDX program.

LIG Nex1’s CIC of the future features a large room with a 360° video wall. This set up reminds us a lot of the planned CIC of the next generation of frigates of the JMSDF, designed by Mitsubishi Heavy Industries. One notable difference however is that while the Japanese CIC will be circular in shape (and feature curved video walls), the Korean configuration is rectangular / hexagonal in shape.

There are actually three separated area in the CIC:

That is a total of 22 multi-function consoles plus a tactical table for cooperative mission planning and situational awareness. There are also four more consoles in the “fleet commander” room and two additional consoles in the “sonar operators” room bringing the grand total to 28!

And again, the entire CIC is surrounded by a 360° degree wall fuzing data from the vessel’ sensors and providing situational awareness via augmented reality technology to all operators inside the CIC. But that is not the only amazing feature of LIG Nex1’s CIC.

Tactical table with holograms thanks to light field technology

The truly unique feature of this CIC is the tactical table: It will be able to display true holograms (as in 3D hologram) without the use of smoke or vertical screen. LIG Nex1 told us that this tactical table will be using “light field display” holographic technology currently being fine tuned by their technology partner (and consumer electronics giant) LG. Light field displays use a microlens array to split an image into individual light rays. Using adequate encoding of the image shown, the display can create a light field directly in front of the viewer’s eyes, who can then focus on the various depths of a scene.

The technology will be available in the next couple of years, well before the first KDDX hits the water.

This tactical table will the ship’s commander and crew greater perspective on the tactical situation surrounding the ship (or during mission planning) especially to reflect threats and tracks in the air and under water.

In addition to the CIC concept, LIG Nex1 was also showcasing several variants (featuring different sensor configuration) of its I-MAST proposal. We were not authorized to take pictures of it however, as we were told this project was “highly important and highly sensitive”. Hanwha had a similar “secret room” on their stand at MADEX, to showcase their CMS and I-Mast solution but we didn’t get access to it.

LIG Nex1’s I-MAST integrates all main sensors such as S-band and X-band radars, IRST, communication antennas, C-ESM, R-ESM and TACAN. All sensors are of LIG Nex1 origin, which guarantees the ease and integration and reduces the risks of incompatibility between them. 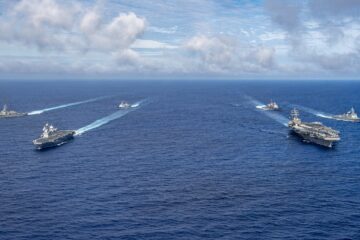