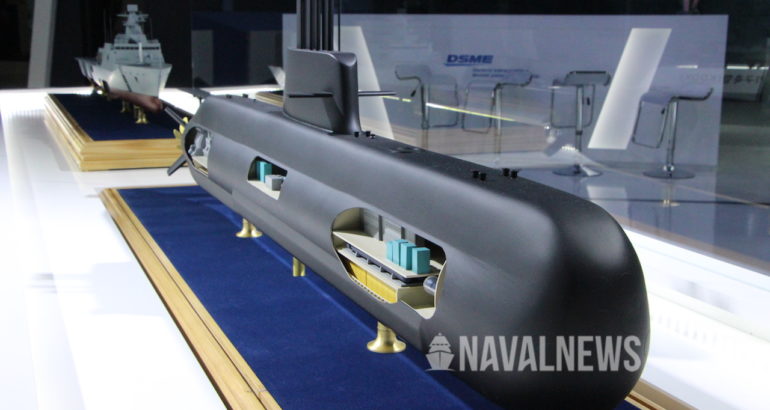 The « DSME2000 » is « a new generation submarine. As you know, we have experience in manufacturing and delivering submarine, » Jejun Park, Principal Engineer, told Naval News. Leveraging its know how acquired with both the 1,400 tons design offered to the Indonesian Navy, and the latest technologies acquired with the domestic KSS III project DSME came up with this new medium size submarine. « This is just a finished conceptual design which can be customized, » added Park.

This 2,000 ton-class submarine is powered by a diesel-electric propulsion system with AIP and « the latest Lithium-Ion batteries », allowing a maximum submerged speed of 20 knots and a maximum surface speed of 10 knots. The range 10,000 nautical miles at cruising speed. The DSME2000 has a length of 70,3 m and a diameter of 6,3 m. It accommodates a crew of 40, including 10 « guests », which means that the submarine would be able to sustain Special Forces operations.

The DSME 2000 submarine features a flexible weapon launching system adapted « upon customer demand ». It first relies on 8 torpedo tubes with a total of 16 torpedoes, including 8 spare units.