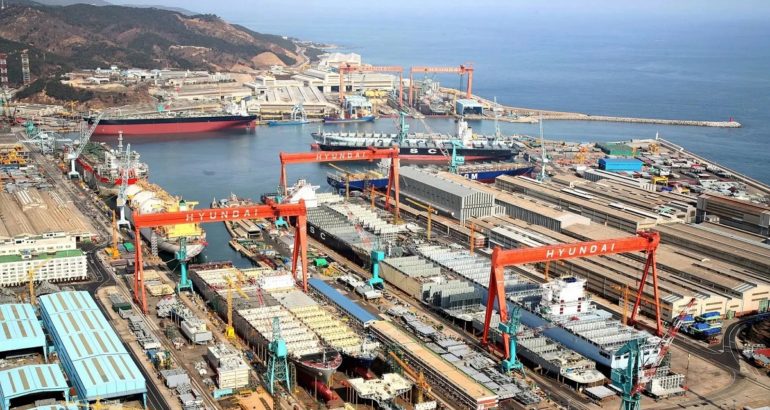 South Korea’s HHI and DSME Shipyards Not Impacted by Coronavirus

South Korea might have been the country, after China, with the most reported cases of Coronavirus earlier this month, the two shipbuilding giants HHI and DSME appear to be unaffected.

While the leading naval shipbuilders across Europe or the United States are impacted by the epidemic, with consequences on production and delivery likely, Naval News reached out to South Korea’s two leading shipbuilders. Hyundai Heavy Industries (HHI) and Daewoo Shipbuilding & Marine Engineering (DSME) both reported that their production remains unaffected, mostly thanks to early prevention measures put in place.

The production at HHI shipyard in Ulsan has not been affected by the virus. HHI is cooperating closely with the Korean Government health and quarantine authorities to take every measures to prevent the virus from entering the company. As of today, none of our employees are infected by the virus. HHI is encouraging telecommuting and flexible commuting hours for the employees to promote social distancing. For commuting employees, HHI performs health check on arrival each day to make sure they are fit for work. Furthermore, the virus growth rate is rapidly declining in Korea due to strict measures taken by the government and the people.

Regarding ongoing HHI’s naval ships programs, HMNZS Aotearoa is currently completing her Sea Trials. She will be delivered to the Royal New Zealand Navy in the second quarter of 2020. The first Jose Rizal-class frigate for the Philippine Navy is undergoing sea trials and is scheduled for delivery next month. Its sister-ship, Antonio Luna, is undergoing outfitting.

For the domestic marketing, HHI is set to built the third KSS III Batch 1 large conventional submarine for the ROK Navy. The company received the construction contract for the first FFX Batch III frigate. Last but not least, the Ulsan shipyard is working on the detailed design of the KDX III Batch II Aegis destroyers, is in charge of the conceptual design for the ROK Navy’s future aircraft carrier and is working on its KDDX design proposal.

DSME has no constraints in terms of production due to COVID-19 Virus. As a first tier shipbuilder in the world, we organize Response Committee for COVID-19 and follow proactive health safety and environment (HSE) measures.

Asked if the construction or delivery schedule of DSME would be impacted, DSME replied that ” This issue is treated as confidential information of the ship owners. However, comparing to the EU shipyards, we don’t expect such major impact considering well-organized prevention systems and corporate culture accustomed to HSE activities”

According to the company, DSME is currently involved with the production of several programs for the Republic of Korea (ROK) Navy, namely:

On the export front, DSME is currently involved in the DSME 1400-class submarine program for Indonesia. The company is also working on its own surface ship and submarine designs specifically for the export market.

It should be noted that HHI Group signed a $1.7 billion deal on March 3 to buy DSME from the state-run Korea Development Bank. Following the deal, HHI Group spun off its flagship unit HHI and set up Korea Shipbuilding & Offshore Engineering (KSOE) as the intermediate holding firm controlling HHI, DSME and its two other shipbuilding units. However, the EU deferred the proposed HHI-DSME merger deal until July this year as the European regulator said it wanted more time to assess the ramifications of the merger. It is not clear whether the current coronavirus crisis will have any impact on this. If the transaction is finalized, the two companies’ combined backlogs in very large crude carriers (VLCCs) and LNG carriers will each account for more than 60 percent of the world total.