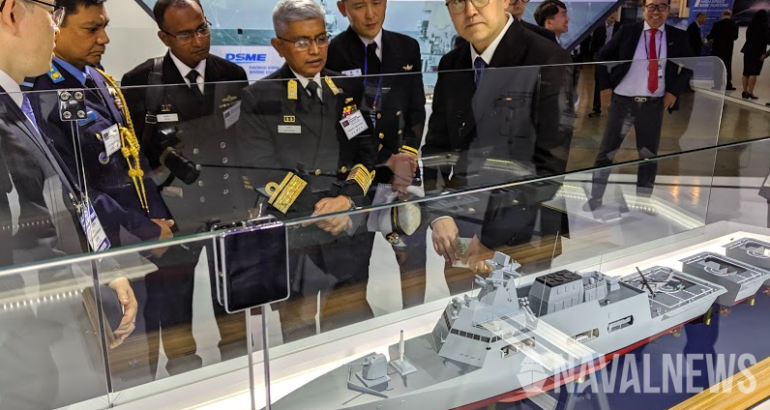 The South Korean shipyard DSME today lifted the veil on its new DW200L light frigate design at this year’s MADEX exhibition, being held from October 22-25 in Busan (South Korea).

DSME’s new multipurpose light frigate project features a unique flexible modularity design which allows the customer to easily build a tailor-made solution. « In the rapidly changing naval environment, it is only when you can cope with every tasks that you can win, » explains DSME. The Korean shipmaker is proposing four optimized models to meet the customer specifications in term of speed, range, length, crew and mission:

DSME only disclosed detailed specifications for the 100 meters / 90 strong crew variant, which would have a displacement of 2,800 tons and an endurance of around 5,000 nm at 15 knots.

Besides accommodation and propulsion, each of the variant is fitted with a stern multi-mission bay in which the customer may install four different modules receiving either a RHIB and a containerized Unmanned Underwater Vehicle, a RHIB and a multi-purpose container, a Towed Array Sonar, or finally a containerized UUV and a multi-purpose container. A fifth mission module is fitted amidship for the storage and launch of up to two Unmanned Aerial Vehicles.

The DW2000L Mission Modularity concept proposed by DSME allows the customer to choose its module from a wide range of weapons and sensors, such as the NS200 Long Range AESA Naval Radar designed by Thales Nederland or the 20 mm Narwhal naval gun from Nexter Systems. The same philosophy has been preferred for the main armament, which may consists of 40 to 127 mm naval gun systems. For the vertical launch system, the customer can choose between an 8-cell or a 16-cell system installed behind the naval gun. Different packages and configurations provides the Navies with all the necessary mission systems required to perform Anti-Surface Warfare, Anti-Air Warfare and Anti-Submarine Warfare.