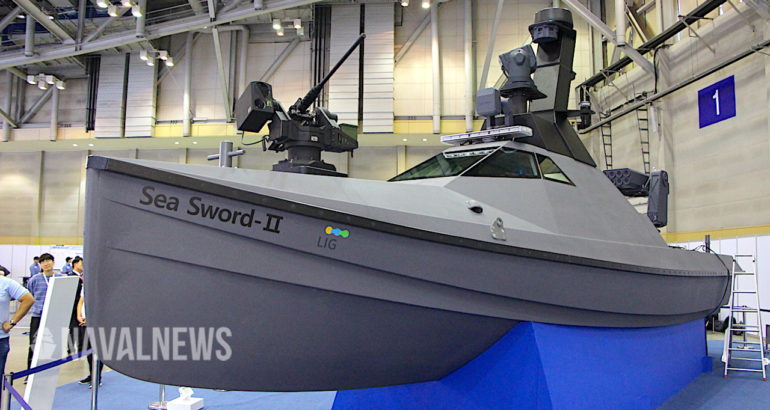 While the Sea Sword I has a length of 9 meters and has been designed for the ROK Coast Guard, the 12 meters long Sea Sword II is being developed to meet specific needs of the ROK Navy for a more powerful and armed USV.

The Sea Sword II is 12 meters long, has a beam of 3.5 meters and a weight of 11 tons when fully loaded. It is powered by two diesel engine, providing a maximum speed of 35 knots. It has an operational endurance of about 180 nm at 20 knots.

This new variant is being specifically configured for surveillance and armed reconnaissance missions of littoral areas near military bases and radar blind zones. The Sea Sword II is a multi-mission platform featuring re-configurable mission modules. Besides the aformentioned tasks, LIG Nex1’s new USV can perform specialized missions, such as mine countermeasure and surface warfare, thanks to the 2.75’’/70 mm multiple rocket launcher located at the stern. Additional armament includes a Hyundai WIA 12.7 mm remote-controlled weapon station.

« A first test phase is expected for the end of the year, » a LIG Nex1 representative told Naval News. The Sea Sword II announces an even more bigger version called… Sea Sword III and specifically defined for the ROK Army. Based on a 15 meters platform, it will essentially feature a wider range of C4ISR solutions, LIG Nex1 added.