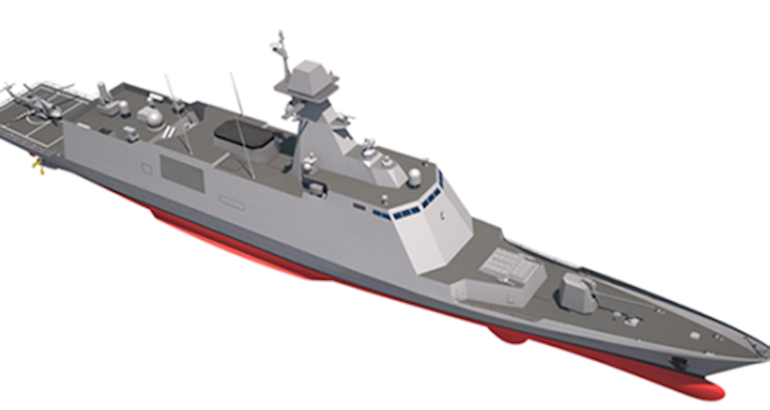 FFX Batch-III is a follow-up frigate acquisition project after Daegu-class FFX Batch-II. It is expected that it will be 129 meters long with a light displacement of 3,600 tons, which is respectively 7 meters longer and 800 tons larger compared to Batch-II frigates.

The target information analyzed by the EOTS (Electro Optical Tracking System) and radar will assist crews to order the weapons system to engage in anti-ship and anti-submarine warfare by providing them with optimal means of attack and defense in real-time. For this, the four-sided fixed multi-functional phased array radar (MFR, designed by Hanwha Systems) that would enable Batch-III frigates to detect and track targets in 360-degree will be installed on an integrated sensor mast. This will ensure improved survivability, detection and tracking capabilities to respond immediately in anti-air and anti-submarine warfare, according to the explanation of Hanwha Systems.

During an interview with Naval News at MADEX 2021, the Junior Engineer of Hanwha Systems told that the new system will integrate detection and weapons systems into one console, also adding that information gathered from radar, sonars, and electric warfare equipment on board can be displayed on the three screens. He emphasized the improved tactical responsiveness that Hanwha achieved by unifying operational action processes under one console for functions that were previously controlled by different consoles. The operator would thus be able to check the general status of weapons and overall maritime situations around the Batch-III frigate, based on general information provided by installed systems on the ship, enabling a quicker countermeasure against enemy actions or potential threats. Also, the engineer confirmed that the combat system console’s user interface has been improved significantly with three screens unlike the previous one that had only two screens available.

The company observed that this integrated system will be possibly applied to other future ships as part of Baselines, a technical basis of the combat system. Baselines effectively help operators compare functions and performance of each.

Meanwhile, Hanwha Systems flatly refused to provide Naval News with specific explanation about the purpose and details of each three screen, cautiously requesting us not to film details shown on screens to prevent any possible information leakage.

A total of six FFX Batch-III is scheduled to be constructed from 2016 to 2027 by spending 2.8 trillion KRW, and the first Batch-III frigate will be delivered to the Republic of Korea Navy in 2024. As Naval News reported, Hyundai Heavy Industries (HHI) won a Defense Acquisition Program Administration (DAPA) contract for the detailed design and construction of the first in class ship in Mid-march 2020:

Xavier Vavasseur 14 Jul 2021
Day 1 for Naval News at DEFEA 2021, the International Defense Exhibition held in Athens, Greece. We focused on the future frigate requirement of the Hellenic Navy and interviewed five of the six contenders.

Xavier Vavasseur 13 Jul 2021
At DEFEA 2021, the International Defense Exhibition which opened its doors today in Athens, Greece, Italian shipbuilder Fincantieri confirmed that it is proposing the Italian FREMM frigate design to the Hellenic Navy.