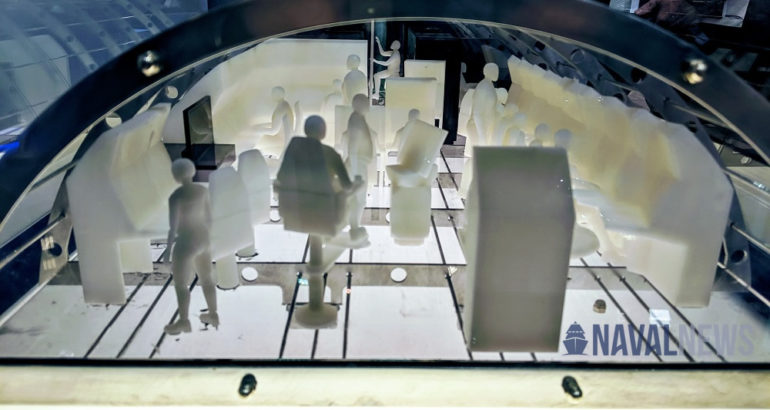 At PACIFIC 2019, the international maritime exposition held in Sydney, Australia, Lockheed Martin Australia was showcasing for the first time a scale model of what could be the control room of the future Attack-class submarine for the Royal Australian Navy.

Lockheed Martin representatives insisted the 3D printed scale model was just conceptual and not representative of what the final ops room configuration. The model was used to illustrate how operator consoles might be arranged on board the future submarines in order to optimize workflow.

The scale model on display at the show featured 18 workstations:

In addition, there is an extra (standing) workstation with a screen that can be moved 360 degrees. This is probably used for mission planning and collaborative tasks.

As is often the norm aboard submarines, workstations for electronic warfare and communication are located in a separate area: The scale model on display at PACIFIC 2019 showed 5 more workstations dedicated to these tasks located forward of the control room, in the same area where the computer racks are located.

The French barracuda type submarine (Suffren-class SSN) has quite a different configuration as you can see in our exclusive video:

Lockheed Martin Australia uses a modelling software to design and optimize the environment and layout inside the Attack-class’ control room.

In addition to the that modelling software, Lockheed Martin Australia has established a combat system lab in South Australia to emulate a real submarine control room:

According to Dr John Towers, human integration systems lead for the Attack-class submarine at Lockheed Martin Australia, some of the Key points to take into consideration while designing the optimal layout for the submarines using human factors technology include: