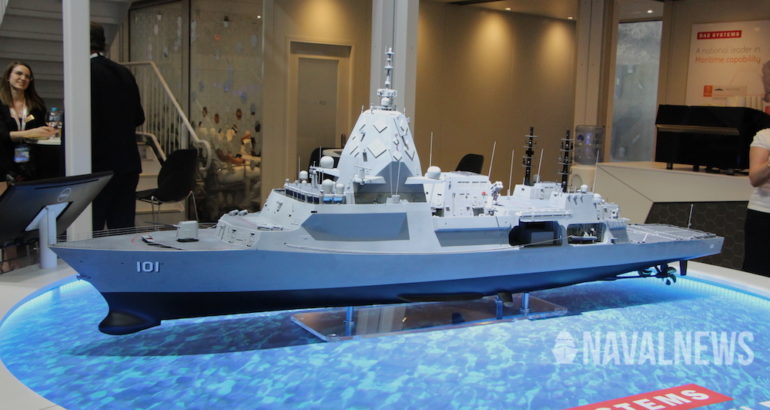 On October 2017, the then Prime Minister of Australia, Malcolm Turnbull, announced « the combat management system for Australia’s fleet of nine Future Frigates will be provided by the Aegis Combat Management System, together with an Australian tactical interface, which will be developed by Saab Australia. This decision will maximize the Future Frigate’s air warfare capabilities, enabling these ships to engage threat missiles at long range, which is vital given rogue states are developing missiles with advanced range and speed. »

Centered around the AN/SPY-1 radar, Aegis is a fully integrated combat management system, providing full 360- degree, 3D tracking capacity. Aegis is successfully integrated aboard aboard 128 surface combatants (and counting) across 6 navies. On the Hunter-class frigates, Aegis will be integrated with the CEAFAR 2 Active Phased Array Radar developed in Australia by CEA and the Saab Australia 9LV tactical interface.

On February 2019, Raytheon Australia was selected by the Australian MoD to act as its Aegis systems integration agent. « Raytheon Australia will provide Defence with their demonstrated expertise for the successful implementation, evolution and continuous development of Aegis combat systems in our current and future surface combatants, » the former Defence Minister Christopher Pyne then said.

Lockheed Martin’s Aegis, through the Common Source Library, will maximise software reuse and enable rapid technology insertions to be used across multiple platforms. Selection of the Aegis system secures numerous jobs across the country, as Lockheed Martin Australia employs over 1200 people, including 500 engineers and technical staff in systems integration and engineering disciplines.

The potential price tag for the Aegis acquisition for the nine Hunter-class vessels, while upgrading the RAN three existing Hobart-class AWD destroyers is US$ 185 million, according to the June 2018 FMS announcement made by the US Defense Security Cooperation Agency (DSCA).