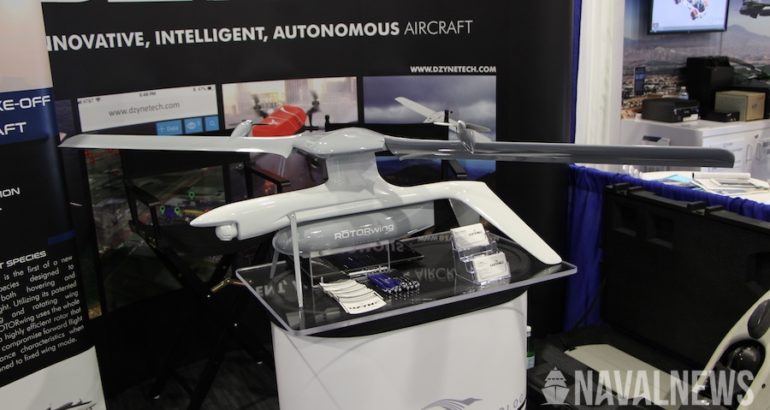 First of a new species of advanced VTOL unmanned system appeared at Sea Air Space 2019 exposition, held this week in National Harbor. Designed by the California-based Dzyne Technologies, the ROTORwing intends to optimize both hovering and forward flight.

For takeoff, ROTORwing has one wing facing forward and the other tilted ~180 degrees back to face in the opposite direction.  This allows the wing to spin like a rotor when power is applied.  When the rotor RPM is reached, the aircraft can now be commanded to hover using the full wing/rotor for lift. A small tail-rotor is used for aircraft fuselage pointing. The ROTORwing rotor is propelled directly by the motors on the wings. This eliminates the need for heavy and complex gearboxes, swashplates, and high-power tail rotors.

At a safe altitude, the wings are quickly tilted upwards arresting the rotor spin. Next, the rotor is locked into position, and both wings are tilted, so the engines face forward allowing ROTORwing to fly like a conventional fixed-wing airplane. For landing, the process is reversed so ROTORwing can execute a vertical landing. The transition process from hover to forward flight, as well as forward flight back to hover, only takes a few seconds with minimal altitude drop.

Once switched in fixed wing mode, the two Li-ion powered propellers allow a maximum speed of 32 knots. Its compact design makes it runway independent, and gives this 20 lb UAV the ability to operate out of any 20 ft to 20 ft clearing.

Dzyne Tech already completed a first phase of separate tests on VTOL and flight modes. « We are now looking forward to start a second phase involving the critical transition phase from vertical to horizontal flight, » adds a Dzyne Tech representative. A complete flight test is expected for the next Fall.

Offering a three hour endurance and a 100 nm range in surveillance configuration, the Block 1 ROTORwing can accomplish a variety of tasks based thanks to the integrated EO/IR gimbal, such as ISR, strike assessment, or border surveillance. Moreover, silent electric propulsion enables close proximity surveillance missions.

On payload delivery surveillance, the UAV features an endurance of one hour and an operational range of 25 nm. The detachable cargo pod fitted under the wing is capable of carrying up to 7 lb of payload and is easily removable. Missions portfolio for this configuration includes lifesaving medical supplies, Dzyne Tech explains.

Based in Vanderbilt (CA), the aircraft developer is a long lead partner of the DARPA, AFRL, NASA, Raytheon and US Department of Homeland Security, among others. « We are very hard-skilled in artificial intelligence and machine learning. Dzyne Tech also provides rapid prototyping to US customers, » Naval News learns.