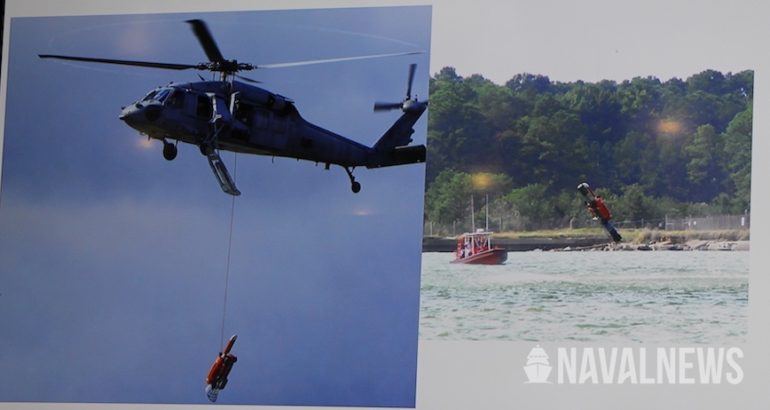 As Unmanned Underwater Vehicles are called to proliferate in a near future, the US Naval Surface Warfare Center’s (NSWC) Panama City Division is now exploring new options to ease the UUV launch and recovery phases.

Current delivery methods used by the US military include launching from shore or from small craft.  « Such methods present many limitation, » Tim Currie, Technical Program Manager for Aviation Systems and Mission Package in-Service Engineering Agent, NSWC Panama City Division, said at  the Sea Air & Space 2019 exposition. Therefore, the US Navy requests the ability to launch and recover a UUV from an aircraft platform. According to Currie, LARS integration on aerial platforms would involve numerous benefits, such as UUV battery conservation, mission timeline decrease, and higher sea states deployment and recovery capability. Using such technology would also implicates that UUV base of operation is no longer limited to port locations.

« This is a challenging concept which must deal with NAVAIR crash loading, aircraft interface, automated docking device development, and winching requirements, » Currie added. Dubbed « Airborne Surface Quad-thruster Underwater Interface Device » (ASQUID), the launch and recovery device being developed by the NSWC is deployed with an existing AN/ALQ-223A Carriage Stream Tow and Recovery System (CSTRS), currently being used with the MH-60S for sensor deployment.

ASQUID is being developed under 219 funding, also called « Naval Innovative Science and Engineering Program » (NISE) program. A prototype, the ASQUID system is currently sized to deploy and recover a Mk-18 Mod 2 Kingfish UUV.

The ASQUID system is operated by a single air crewman through an « X-box » control device. Once the UUV is unpowered and floating on surface, the crewman maneuvers the ASQUID to front of UUV and drives it onto the unmanned vehicle. The UUV is then locked into place and winched to side of the aircraft.

A first flight test was successfully performed at Patuxent River National Air Station by the Air Test and Evaluation Squadron 2-1 (HX-21) « Blackjack ». The path forward will include sub-surface active docking capability. « Mk-18 Mod 2 teams are now working on various technology for automated docking, » Currie said. The ASQUID project is also to incorporate scalability to accommodate various UUV sizes, the UUV recovery portfolio still being limited by CSTRS and aircraft envelope and power. « But the most challenging development will be for the industry to develop standards for UUV docking features », he concluded.