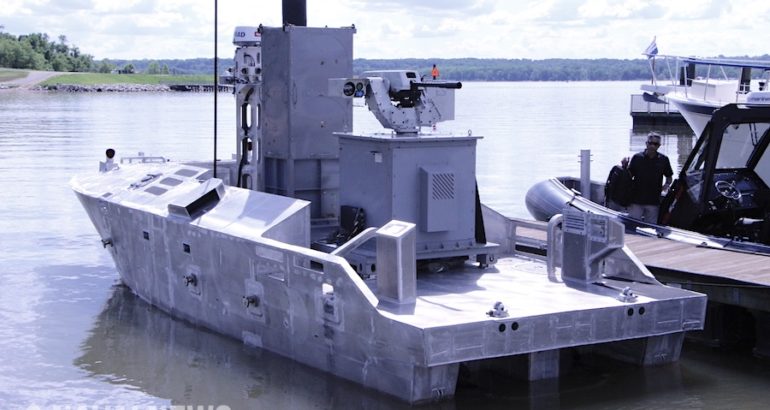 Textron’s armed CUSV features two weapons systems: The Battle Management System (a vertical launcher for Hellfire missiles) and a remotely-operated weapon station: The ARES Control combined with an FN Herstal SeaDeFNder. This further development is part of a Cooperative Research and Development Agreement (CRADA) signed in January 2018 with Textron “ to develop and integrate surface warfare payloads onto the Common Unmanned Surface Vehicle (CUSV).”

The Battle Management System (BMS) is a weapon system that employs Standoff Precision Guided Munition from air and surface platforms as well as guns from aircraft gunships. This allows remote targeting, fire control and launch of missiles.

ARES provides automated optical detection, tracking and fire control capabilities to existing Remote Weapon Stations. This provides the capability for the weapon system to do most of the low level tasks that a human would normally do, but it also enables several other important capabilities:

The ARES Control is combined with an SeaDeFNder remote weapon station by Belgium company FN Herstal. The RWS is on a two years loan to NSWCDD.

The Textron CUSV is a multi-mission unmanned surface vehicle initially developed to be integrated to Littoral Combat Ships. It is capable of carrying multiple payloads, including side-scan sonar, mine neutralization, nonlethal weapons, and intelligence, surveillance and reconnaissance (ISR) sensors. It is capable of 30 knots and has a range of 400 nautical miles. Since its first demonstration in 2009, the CUSV has successfully completed several prominent exercises with the U.S. Navy.

Xavier Vavasseur 18 Aug 2021
Day 2 video coverage at the Sea Air Space 2021 exposition near Washington DC. In this video we focused on Naval Aviation...

Xavier Vavasseur 17 Aug 2021
Day 1 video coverage at the Sea Air Space 2021 exposition near Washington DC. In this video we focused on new designs. We discussed with Austal, Halter Marine, Raytheon and Saildrone.