Naval News met with Rear Admiral Brian Corey, Program Executive Officer for Unmanned Aviation and Strike Weapons, to get an update on the MQ-25 program during Sea Air Space 2022.

In this video we discuss:
➡️ The latest milestones of the MQ-25 program
➡️ What’s next ?
➡️ Any international interest ?
➡️ What about weaponization of the Stingray ?

The MQ-25™ Stingray will be the world’s first operational, carrier-based unmanned aircraft and provide aerial refueling and intelligence, surveillance and reconnaissance (ISR) capabilities that enhance capability and versatility for the Carrier Air Wing (CVW) and Carrier Strike Group (CSG). Integration of a persistent, sea-based tanker into the CVW will make better use of our combat strike fighters and extend the range of our aircraft carriers. The system will be a critical part of the future CVW and is central to the Navy’s strategic Unmanned Campaign Framework, laying the foundation for all future carrier-based unmanned systems and pioneering the cutting-edge manned-unmanned teaming (MUM-T) operational concept. The Navy plans for all NIMITZ and FORD-class carriers to eventually be MQ-25 capable.

Following its first flight in 2019, T1 accumulated approximately 125 hours in the air, helping to accelerate the team’s understanding of the aircraft’s aerodynamic performance and informing design decisions for both the air vehicle and its software.

In 2021 the MQ-25 T1 test asset was successfully integrated into the carrier environment, where a demonstration aboard the USS George H.W. Bush confirmed the functionality, capability and handling qualities of the unmanned aircraft’s deck handling system. 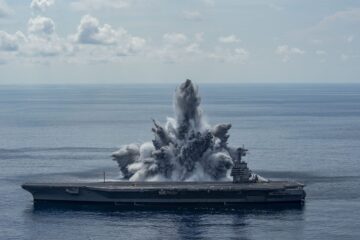