NASSCO has proposed major modification concepts to the U.S. Navy's Expeditionary Sea Bases, or ESB, which could see them serve as motherships for XLUUVs and UAVs, or transit F-35 airframes...

General Dynamics NASSCO has developed several major modifications for its line of Expeditionary Sea Bases (ESB) to cater to emerging U.S. Navy and Marine Corps requirements. Thanks to the ESB’s commercial origins from the Alaska-class oil tanker, the potential of the class has been described as “unlimited” by NASSCO. This “unlimited potential” has resulted in modification concepts that could turn ESBs into drone motherships or even aviation support ships.

While these potential modifications made their debut during Sea Air Space Symposium 2022, the same modifications were once again shown at this year’s Surface Navy Association National Symposium by the company.

Jim Strock, an independent consultant working with NASSCO on the ESB, explained the process NASSCO used to tailor these concepts and capabilities toward the future requirements of the force:

Various modifications made to support these operational concepts have been created by NASSO. Such modifications include a new aft flight deck to support unmanned aerial vehicle flight operations, the addition of repair facilities, and the capability to perform replenishment at sea with other vessels. Of these, the two most noteworthy and comprehensive modifications to the ESB are the plans to fit an unmanned underwater vehicle (UUV) bay and what seems to be the embarkation of Marine Aircraft, including F-35Bs, on the ESB.

Strock explained that through a specially made launch system located inside of the vessel, an ESB can support various UUVs including the Orca Extra-Large UUV.

“We call it the Rotary UUV Launch And Recovery System, the RULARS. So we talked about how that can be engineered into the ship. This (referring to the document)  shows just a moon pool. Then we went on to look at the counter-rotating system.”

NASSCO looked into a rotating system due to stability concerns at sea caused by a moon pool-type launch and recovery operation.

“It is much better in mitigating the effects of sea state surge and water coming up. It stabilizes the vehicle and keeps it in the upright position as it rotates down into the water. So the moon pool would work, but you get a lot of wave action and surface action that could become problematic. It’s hard to see here (referring to document), but it goes in, rotates around, and goes out.”

The ESB’s already extensive Command and Control facilities were highlighted by Strock as one of the reasons the vessels could be modified into unmanned motherships.

“We’ve got nearly 40 seats for operational planners, so the C4I spaces are very extensive on this ship that can be collectively used in a variety of fashions to include unmanned systems information integration.”

When inquired on how and why F-35Bs would be supported through these modifications, Strock clarified the role the F-35B would have on the ESB.

“So I want to be very, very clear. This ship was not designed to operate F-35s. Could it transit F-35 airframes into theater that could be transferred to amphibious ships and aircraft carriers? Yes. Could an F-35 with a small amount of fuel and no armament hopscotch from one ship to the next? Potentially, yes. It would involve modifications to the flight deck for deck heating modifications for the jet blast reflection.”

From these comments, these proposed modifications to ESB will not be able to support F-35B operations as those seen on more traditional amphibious assault ships such as the America-class. Instead, the concept stated by a NASSCO brochure involves the embarkation of other Marine aircraft, such as V-22 Ospreys and CH-53K King Stallions, and the facilities to fully support them so that F-35B capable amphibious assault ships can “be configured as F-35 carriers.”

Another modification explored by NASSCO was for ESB to perform At-Sea Precision Lift (ASPL), which would allow ESB to transfer supplies and equipment with other vessels while at sea. When inquired if this modification could allow for the reloading of Vertical Launch Systems (VLS) at sea, Strock stated that the Office of Naval Research is using all of the same technologies shown in the ESB’s ASPL modification concept.

“ONR took all three (technologies) and they’re now integrating that, and generically they’re calling it At-Sea Precision Lift, but they’re using the integration of these technologies for VLS reload.”

As with the previous modifications, ASPL addresses requirements and potential requests from the U.S. Navy going forward. Secretary of the Navy, Carlos del Toro, has made repeated calls for the ability to reload VLS at sea instead of in port.

Posted by : Aaron-Matthew Lariosa
Aaron-Matthew is a freelance writer based in Washington, D.C. He is currently studying International Relations at American University, and is interested in U.S. Marine Corps developments in the Pacific and Philippine Naval modernization efforts. 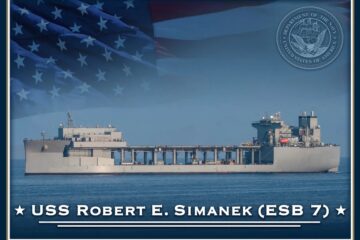