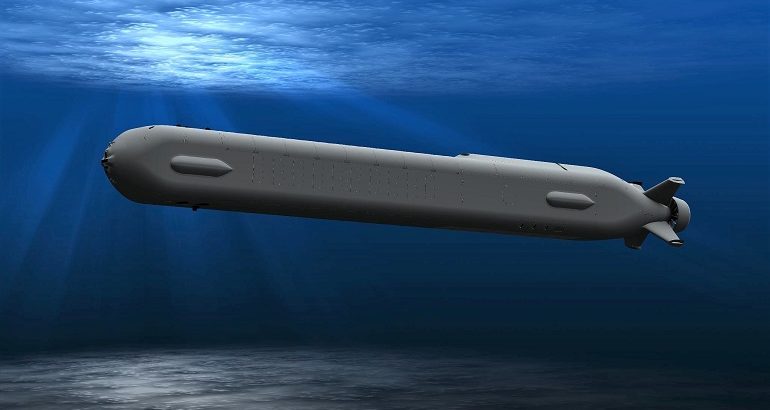 We are pleased with the Navy’s decision to award Boeing a contract to build and deliver four Orca Extra Large Unmanned Undersea Vehicles, and are committed to providing this important autonomous undersea capability to meet the Navy’s unique mission needs.

According to the U.S. Department of Defense contract award notice, the Orca XLUUV will be an open architecture, reconfigurable Unmanned Undersea Vehicle. The Orca XLUUV will be modular in construction with the core vehicle providing guidance and control, navigation, autonomy, situational awareness, core communications, power distribution, energy and power, propulsion and maneuvering, and mission sensors.

At SNA 2019, Boeing was showcasing an Echo Voyage UUV scale model. While Boeing stressed that Echo Voyager and Orca XLUUV are not the same vehicle, they did say that lessons learned from Echo Voyager have been incorporated into their Orca design to improve reliability and reduce risk.

Echo Voyager is a Boeing-funded commercial prototype that is built on 50-plus years of UUV experience and has more than 1900 hours of ocean testing. Echo Voyager was designed and built at a Boeing facility in Huntington Beach, Calif.  The vehicle completed its first phase of sea testing (or Alpha sea trials) last year when it operated off the coast of Southern California for about three months to undergo system evaluations and testing. During that time, the Echo Voyager test team conducted a series of functional tests to verify Echo Voyager’s ability to operate on the surface, just beneath the surface and undersea. Ocean testing tasks included charging the battery, controlling the vehicle in currents and wave action, submerging the vehicle and returning to the surface. Echo Voyager returned to sea in early 2018 for Bravo sea trials, designed to expand the operational envelope from the initial test series. Boeing plans to resume testing this month following a brief pause in the Bravo testing while the company was awaiting additional hardware.

The U.S. Navy selected in 2017 Boeing and Lockheed Martin to pursue the XLUUV program. The aim of the program is to develop and integrate a pier-launched unmanned system that operates completely independently of manned ships. XLUUV prototype contracts are expected to be awarded in early this year.