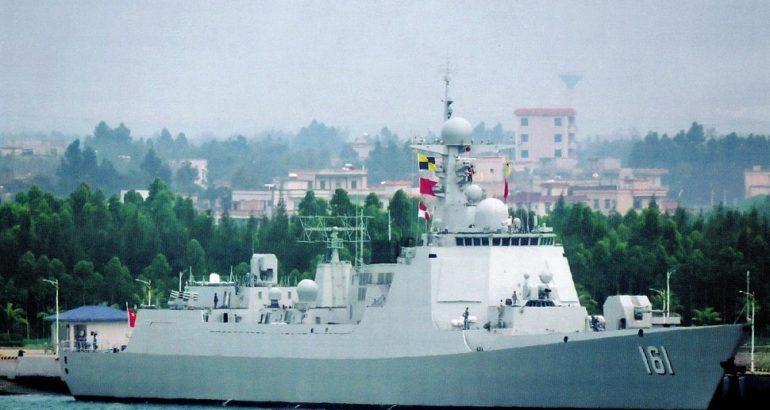 “Hohhot” joined the 2nd Destroyer flotilla of the PLAN South Sea Fleet, 747 days after its launch at the Jiangnan Changxing Shipbuilding and Heavy Industry Corporation (Jiangnan-Changxing) in Shanghai (a member of China State Shipbuilding Corporation CSSC).

It is the 10th Type 052D Destroyer overall for the PLAN and the first for this unit, which deploys “older” generation destroyers such as the only Type 051B Destroyer which just completed its mid-life refit. The 2nd Destroyer flotilla also deploys both Type 052B built in the early 2000s’.

According to Eastpendulum, Chinese netizens used to nickname this flotilla the “Retirement Home”. With the commissioning of this first Type 052D (and more on the way) the nickname is likely to be dropped.

The Type 052D Kunming class (Nato designation: Luyang III) is one of the latest generation of guided-missile destroyer (DDG) of the Chinese Navy. It is based on its predecessor, the Type 052C DDG and likely shares the same hull. However the Type 052D incorporates many improvements in terms of design as well as sensors and weapons fit. This modern class of vessel is considered as the Chinese equivalent to the American AEGIS destroyers.

23 Type 052 Destroyers are alreadu operational with the PLAN or under construction. They are still being built by two shipyards: Jiangnan-Changxing shipyard and Dalian Shipbuilding Industry Company. The first vessel of the class, Kunming (hull number 172), was commissioned in March 2014.

Eastpendulum notes that with a duration of 747 days between the launch and commissioning, outfitting and sea trials of “Hohhot” were completed at a faster pace than for its Type 052D sister-ships. The average average for the class is around 857 days (about 2 years and 4 months). It was even longer (957 days) for “Changsha” the second ship in the class.

This 6th Type 071 was built by the Hudong-Zhonghua shipyard in Shanghai, as was the case for the first five Type 071 vessels. The LPD was launched on January 20, 2018.

Originally designed after the 1996 Taiwan Strait crisis, the Type 071 is 210 meters long and 28 meters wide. It is capable of carrying an 800 marines (1 battalion) and some 20 amphibious vehicles.

For amphibious warfare, the Type 071’s well deck may deploy at least two Type 726 / Type 726A, a Chinese LCAC of approximately 150 tonnes. Each LCAC is designed to deploy a battle tank (ZTZ-96A for example). The ship is also fitted with two large hangars and a flight deck, where two Z-8J helicopters can be operated simultaneously. The ship is fitted with one 76 mm gun and four 30 mm close-in weapon systems.

With the commissioning of “Wuzhishan”, the South Sea Fleet now has 4 large amphibious vessels which will significantly increase China’s ability to support its operations throughout the South China Sea, and beyond.