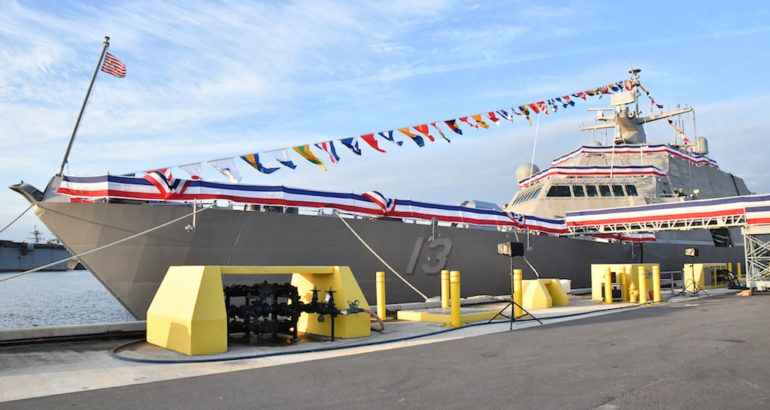 “We are confident that LCS 13 will be what the Navy needs, when the fleet needs it, and we are proud to mark this day with her crew as the Navy welcomes its newest combat ship,” said Joe DePietro, vice president, Small Combatants and Ship Systems, Lockheed Martin. “We remain focused on delivering these ships as quickly as possible with increasing capability and lethality.”

The LCS is a highly maneuverable, lethal and adaptable ship, designed to support focused mine countermeasures, anti-submarine warfare and surface warfare missions. It is enabled with the COMBATSS-21 Combat Management System, built from the Aegis Common Source Library, which drives commonality among the fleet. The Freedom-variant LCS integrates new technology and capability to affordably support current and future mission capability from deep water to the littorals.

“Like a proud parent, I am so excited to share with you how awesome this ship really is,” said LCS 13’s Commanding Officer, Commander Nathan Rowan. “People ask me about Littoral Combat Ship. Is it a new cruiser or destroyer? Actually it’s neither. It’s an entirely new category of warship. The LCS packs quite a hefty punch for such a small package.”

There are seven ships in various stages of production and test at Fincantieri Marinette Marine in Wisconsin, where the Freedom-variant LCS is built. The next Freedom-variant in the class is LCS 15, the future USS Billings, slated for delivery this spring.

“We consider it a privilege to support the men and women who will sail this great ship, protecting the United States and our allies,” said Jan Allman, President and CEO of Fincantieri Marinette Marine. “On behalf of the two thousand individuals that crafted the LCS 13, we congratulate the U.S. Navy and the outstanding crew of the USS Wichita.”