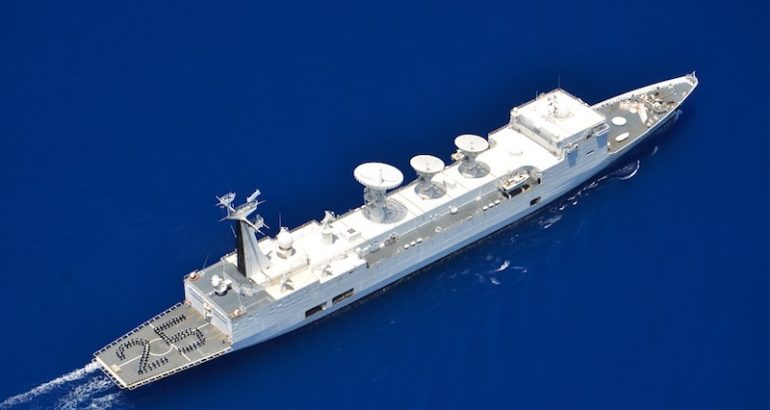 The French Navy's Monge Missile Range Instrumentation Ship (A601) is back at sea. The ship achieved its third major overhaul at the end of 2018, following a year of maintenance work in Brest.

The Monge entered a major overhaul in October 2017. A refit and maintenance period that lasted a year and has just ended. In 2019, the missile range instrumentation ship is once again operational.

This major technical stop focused exclusively on maintenance work on the platform and the measuring systems. The ship was thus stopped for a complete maintenance of its underwater elements (the hull, propulsion engines and the appendages which serve for its control such as the saffron or the valves of hull). Much of the superstructure has also been redone (foredeck, funnel helicopter deck, all pediments and the air and telemetry deck).

Overhaul work on the measuring systems focused on radar, aerology equipment including the Lidar, and the neutralization remote control. The “Monge” has three radars with outstanding tracking and analysis capabilities.

Unparalleled in the world, she can follow a coin that moves hundreds of miles away! On this occasion, the main trajectography C-band radar has undergone its first major refurbishment (decennial refit) since its commissioning in 2009.

Information systems have also been overhauled. In particular, the ship received an upgrade of the radar information system and a new position and attitude management system. The other means of measurement have been the subject of smaller interventions, either by an upgrade or by a minor evolution.

Many scheduled maintenance were carried out during the overhaul. These are essential for the proper operation of the equipment: electro-optical turret, telemetry device and weather means.

The Monge is the largest vessel (in length) in the French Navy fleet following aircraft carrier Charles de Gaulle. The vessel’s keel was laid down in March 1990, launched in October 1990 and commissionned with the French Navy in November 1992. It is used to test and analyse various missile systems (including the new SLBM M51) in conjunction with the French procurement agency (DGA). While its primary mission remains missile test monitoring, the Monge may participate in other missions such as monitoring a space rocket launch or satellite tracking. It may also participate in the monitoring and protection of maritime approaches or support training of maritime forces.