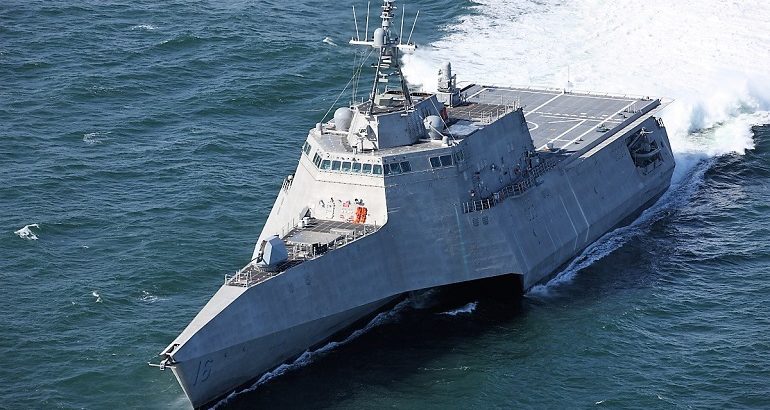 GULF OF MEXICO (March 8, 2018) The future USS Tulsa (LCS 16) is underway for acceptance trials, which are the last significant milestone before delivery of the Independence-variant littoral combat ship to the Navy. During trials, the Navy conducted comprehensive tests of the future USS Tulsa, intended to demonstrate the performance of the propulsion plant, ship handling abilities and auxiliary systems. (U.S. Navy photo courtesy of Austal USA/Released)

After the ceremony, the ship will transit to San Diego to join Littoral Combat Ship Squadron 1 and eight other littoral combat ships currently homeported at Naval Base San Diego.

“She truly is an amazing ship and an amazing addition to the fleet, but as impressive as she is, she would be nothing without the Sailors you see lining her deck this morning. And as much as they have already accomplished, they know their true greatness lies ahead as Tulsa enters the fleet and stands ready to answer her nation’s call. They are the finest Sailors our Navy has to offer. They are tough, able and ready to take our nation’s newest warship to sea.”

The LCS class consists of two variants, the Freedom variant and the Independence variant, designed and built by two industry teams. The Independence variant team is led by Austal USA, Mobile, Alabama, (for LCS 6 and the subsequent even-numbered hulls). The Freedom variant team is led by Lockheed Martin, Marinette, Wisconsin, (for the odd-numbered hulls).