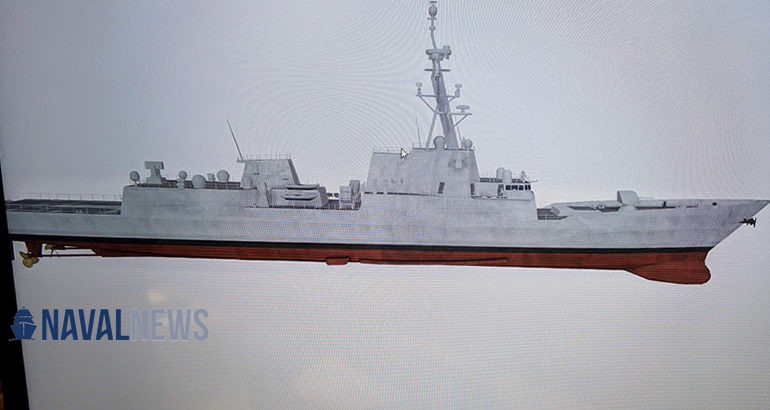 Computer rendering of Navantia / BIW F100 frigate in U.S. Navy FFG(X) configuration with 57mm main gun and RAM launcher. The Navantia / BIW team's parent design is the Royal Australian Navy Hobart-class frigate (also known as AWD) which is itself based on the Spanish Navy F-100.

The new office was inaugurated by the President of Navantia, Susana de Sarriá, accompanied by the Ambassador of Spain, Santiago Cabanas , and by representatives of the Spanish Ministry of Defense and Spanish Navy.

“The opening of this new office responds to the objective of strengthening good relations with the U.S. Navy and industry, with which we have been working for more than 60 years, and seeking new business and cooperation opportunities in the country, in addition to the active participation to the ongoing program for 20 new frigates “.

The US is a strategic market for Navantia who has selected Francisco Barón to lead this office. Mr Barón has significant international experience, in the United State, in Norway and Australia.

In February 2018, Navantia and its local partner General Dynamics Bath Iron Work (BIW) were selected by the United States Government for the Conceptual Design phase of the FFG(X) frigate program, which aim is the acquisition of 20 new frigates, localy built in the United State. The Navantia / BIW team’s parent design is the Royal Australian Navy Hobart-class frigate (also known as AWD) which is itself based on the Spanish Navy F-100.

Navantia and BIW are adapting this design to the requirements of the US Navy. A team of Navantia engineers is now working at the BIW shipyard to support the FFG(X) bid. The conceptual design phase has a duration of 16 months.

Ship designs from the five shipbuilders will be evaluated by the US Navy. The final specifications that will be used for the FFG(X) request for proposal will be announced in 2019 and the contract award is expected for 2020. The US Navy is set to buy one frigate in 2020 and one in 2021, followed by two each year, for a 20-ship class.