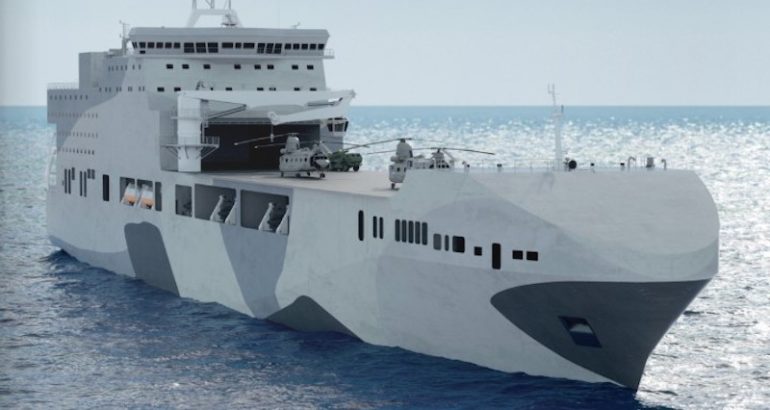 In a short statement, Prevail Partners says that its Prevail Multirole Vessel (MRV) is being offered as a wet-lease using an international maritime industry time-charter framework. As a highly mobile logistic and helicopter base, the ship « enables nations to project power, carrying out the most time-sensitive Special Forces missions and managing threats at range with swift and decisive action ». The first ship could be ready for operations in 2020, the company adds.

With an operational range of over 10,000 nautical miles and speed in excess of 20 kts, the Prevail MRV is capable to moving from one operation to another at pace, the company says in its proposal. Tailored for a various range of missions, such as amphibious operations, counter-terrorism, humanitarian and disaster relief, and hospital ship, the MRV is offered as « a turnkey solution for 300 operational days a year ».

Operated by a crew of 35, the MRV integrates specialist capabilities such as USVs or UAVs, naval C4ISR, and substantial flight deck and hangar able to support CH-47, Super Puma, AH-64 Apache or any other rotorcraft operated by the British Armed Forces. The platform also includes two launch and recovery systems to enable a variety of maritime craft including 11m Offshore Raiding Craft.

Moreover, the 209-meters long vessel accommodates and supports an embarked force of 400, while integrating surgical and intensive care bays with the ability to expand the MRV to a Hospital Ship. Each MRV will have over 2400 lane meters of vehicle decks with the ability to carry up to 7500 deadweight tons of stores or aid supplies.