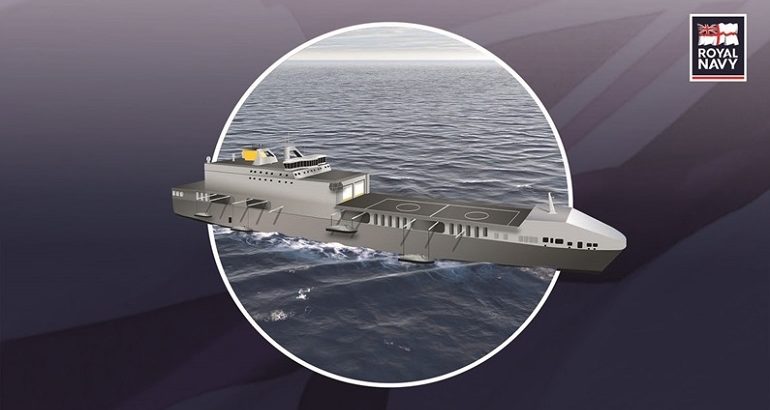 Littoral strike ships are vessels which can command an assault force from anywhere in the world – carrying everything from helicopters and fast boats to underwater automated vehicles and huge numbers of troops. Royal Navy image.

They would each be forward deployed, permanently away from UK shores, to exert global influence on behalf of the UK government.

The work announced by the Secretary of State will now look at how and when the Ministry of Defence could deliver the ships into future service.

(not to be confused with the FSS) pic.twitter.com/lZdHtVXFf5

Littoral strike ships are vessels which can command an assault force from anywhere in the world – carrying everything from helicopters and fast boats to underwater automated vehicles and huge numbers of troops. They are designed to be able to get in close to land – with ‘littoral’ literally meaning the part of the sea which is closest to the shore.

Under plans being looked at by the Royal Navy and Royal Marines, these assault ships would be forward deployed permanently away from the UK. They would therefore give the UK government greater options in terms of working with our allies around the world but also allow the flexibility to deal with a crisis anywhere in the world.

The ships would need to be versatile enough to handle a range of different missions in all types of environments, and they would also be able to work as part of a larger strike group. Key to their success are the Royal Marines, remade as the future commando force and enhanced with their own cutting-edge technology – and the ability to be more lethal, agile and far-reaching than ever before.

The concept of Littoral Strike Ships put forward by the British Minister of Defense is another example of the emerging trend of a new type of vessels, which are large multipurpose platforms based on large-capacity commercial ships (supertankers and large container ships and ferries). Due to their size, such ships are perfect for long expeditionary deployments. They can ensure military presence and will be able to carry the widest range of loads and weapons, including rotary wings and amphibious craft. They may be fitted with missiles and strike weapons, as well as perform the role of floating bases and supply and support vessels. The use of commercial hulls makes such ships relatively affordable, even for large sizes, which should speed up their acquisition or construction.

As pointed out by our colleagues at savetheroyalnavy.org (see tweet above) the Future Littoral Strike Ship concept imagery posted by the First Sea Lord looks like a merchant conversion, similar to the MV Ocean Trader used by US special forces (pictured above). The MV Ocean Trader (ex-Cragside) is a Special Warfare Support vessel operated by US Military Sealift Command.

The US Navy’s Request For Proposal called for a dual-screw ship capable of sustaining 20 knots speed with a range of 8000 miles, with 45 days endurance for a crew of 50 persons, augmented by a surge of up to 159 additional government personnel, and able to be refueled and re-provisioned underway for an additional 45 days’ endurance for all 209 personnel. The vessel was to include capability to embark, hangar, launch and recover all rotary wing aircraft in the SOF inventory up to the size of the MH-53E, provide multiple refueling points for aircraft with a capacity for carrying 150,000 gallons of JP-5 fuel, carry and launch 4 boats of 12.3m length, two simultaneously within 20 minutes, and be able to carry, launch, and recover 8 jet skis and Zodiac inflatables.

The full and detailed RFP document is available at this link.