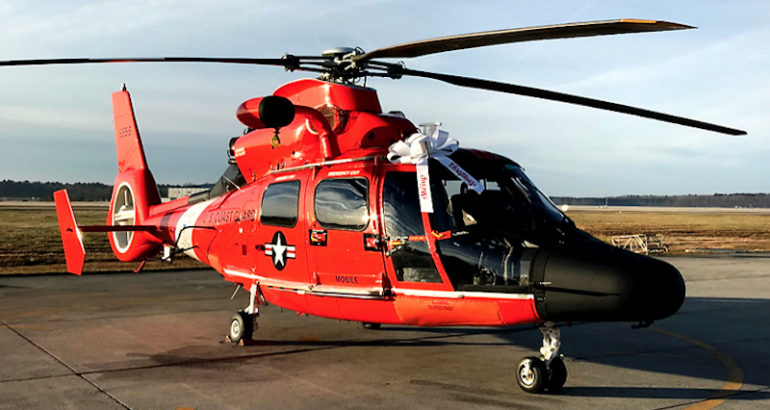 The US Coast Guard (USCG) is completing the first phase of production and moving to full-rate production on concurrent Service Life Extension Program (SLEP) and avionics upgrades of the service’s H-65 short range recovery helicopters, a SAR variant of the French-built AS365 Dauphin.

The avionics upgrades include reliability and capability improvements for the Automatic Flight Control System; installation of a digital cockpit display system and an upgraded digital weather/surface search radar; integration of a robust Command, Control, Communications, Computers, Intelligence, Surveillance and Reconnaissance (C4ISR) suite and modernization of the digital flight deck with Common Avionics Architecture System (CAAS), common with the Coast Guard H-60 medium range recovery helicopter and similar Department of Defense aircraft. Once the upgrades are complete, the helicopter is redesignated an MH-65E.

At the same time, the USCG is completing SLEP activities to replace five major structure components – the nine-degree frame, canopy, center console floor assembly, floorboards and side panels. These mission-critical improvements are designed to extend the service life of the helicopter by 10,000 flight hours.

Work was finished Dec. 18, 2018, on the first H-65 – CG 6556 – to complete SLEP activities and the avionics upgrade in a joint production line. Termed low rate initial production (LRIP), this first phase allows the service to review and validate improvements required after the initial work on the prototype and validation/verification (CG-6587) aircraft. During this phase, USCG teams discovered that the wire analysis system was not completely ready for full production. On-the-spot corrections were made to remedy the problem and rolled into the production process for future aircraft.

The avionics upgrades and SLEP are being completed at the same time to achieve schedule and cost efficiencies. The USCG will also sequence the installation of new upgrade components after SLEP and programmed depot maintenance is complete, avoiding unnecessary rework that would be required if the efforts were conducted separately.

On Jan. 7, 2019, the H-65 Program with Commander Operational Test and Evaluation Force began initial operational and test evaluation (IOT&E) activities on two of the three aircraft that have been converted to the Echo configuration, the LRIP and validation/verification aircraft. IOT&E is the evaluation process used to demonstrate the MH-65E’s airworthiness and ensure the aircraft meets operational requirements and associated performance requirements, and is able to safely and effectively perform the Coast Guard missions prior to fleet induction.

Twenty-one ground events and 56 flights have been planned for IOT&E. There will be three test periods and one make-up test period that take place in a three-month window.

A final test report of data collected from both the operational assessment and IOT&E will be used to support a decision for the program to move into full rate production. The program anticipates an ADE-3 decision in the first quarter of fiscal year 2020.

Projected completion of the MH-65E conversion for all 98 aircrafts is fiscal year 2024.