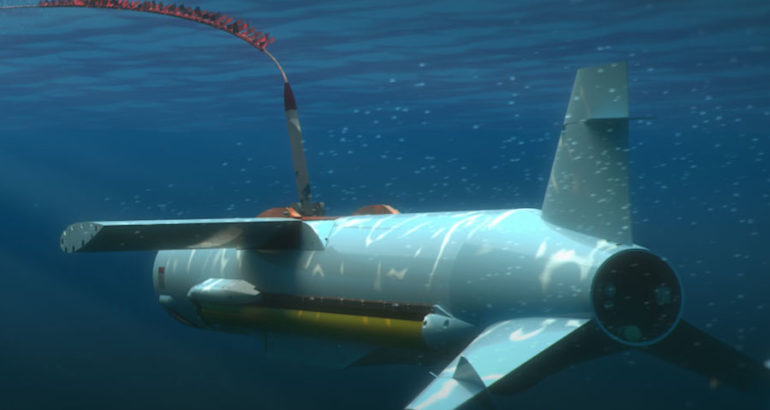 A rendering of the US Navy's AN/AQS-20C towed sonar (Credit: Raytheon)

The AQS-20C is the next generation of the AN/AQS-20 system designed to be incorporated into the Littoral Combat Ship Mine Countermeasures Mission Package. The system consists of four sonar arrays: two side-looking arrays; a gap-filler sonar array; and a forward-looking sonar array providing simultaneous detection, localization and classification of bottom mines, close-tethered moored mines and volume-moored mines.

The system delivers high-definition images of bottom mines, providing the operator with both range and contrast data that combine to form a three-dimensional image during post-mission analysis to aid in mine identification.

Developmental testing verifies that a system’s design meets all technical specifications, and that all contract requirements have been met. During testing the Raytheon-developed towed sonar sensor conducted 12 underway missions in various operational modes and at different depths at four separate NSWC PCD test ranges. The missions were conducted aboard the test vessel M/V Patriot.

The AQS-20C will now be integrated with and deployed from the Mine Countermeasures Unmanned Surface Vehicle (MCM USV), a long-endurance, semi-autonomous, diesel-powered, all-aluminum surface craft that supports the employment of various mine countermeasure payloads. The MCM USV can be launched and recovered by the LCS, from other vessels of opportunity or from shore sites to provide minesweeping, mine-hunting and mine neutralization capabilities. The MCM USV is currently undergoing developmental testing as a component of the Unmanned Influence Sweep System at the South Florida Test Facility in Fort Lauderdale, Florida.

Test results will now undergo scoring and performance assessment leading up to a final developmental testing report that is expected to be completed in the spring. Findings from this report will be used for future performance improvements of the system.