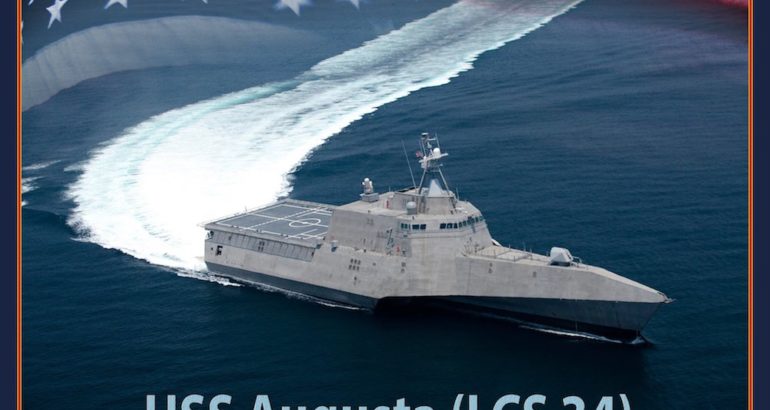 Austal USA is proud to announce the name of littoral combat ship 34, USS Augusta (LCS 34) after the city of Augusta, Maine, the shipyard announced on January 31.

The name was revealed today by the U.S. Navy and U.S. Senators Susan Collins and Angus King. LCS 34 will be built at Austal USA’s state of the art manufacturing facility in Mobile, Ala. with start of construction scheduled for 2020.

“Maine is a state with a rich patriotic history and it gives us great pleasure to build a small surface combatant that will carry the name of its capitol city,” said Austal USA President Craig Perciavalle.

The city of Augusta was named after the daughter of American Revolutionary War hero Henry Dearborn who rose through the officer ranks and fought with General George Washington in the Continental Army against the British.

With five INDY variant littoral combat ships currently under construction and a sixth, LCS 30, set to begin construction next month, the future USS Augusta (LCS 34) is the 17th LCS to be built at Austal USA’s facility in Mobile.

The 127m, frigate sized, vessel was originally designed in the Austal center for excellence in maritime design, based in Henderson, Western Australia. The vessel design has been transferred to Austal USA and build is undertaken in the Austal purpose built shipyard based in Mobile, Alabama USA.