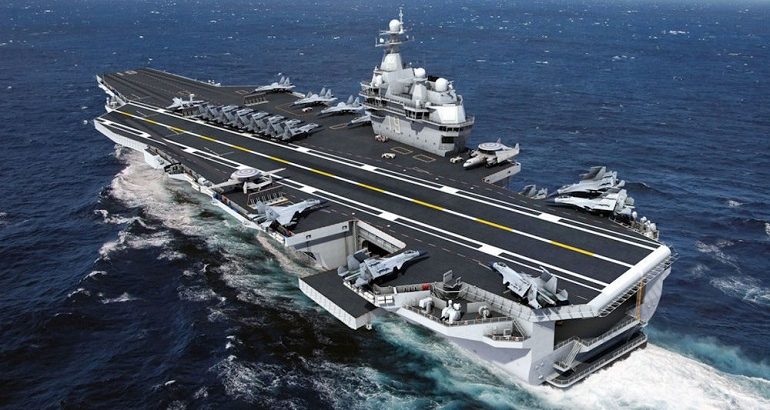 Artist impression (fan art) of China's 3rd aircraft carrier which will likely be in CATOBAR configuration.

What if China’s 3rd Aircraft Carrier is Conventionally-Powered & Features EMALS ?

An article published by a subsidiary of Chinese naval group CSSC is suggesting quite clearly that the People's Liberation Army Navy (PLAN or Chinese Navy) 3rd aircraft carrier will use a conventional propulsion system and EMALS catapults.

The fact that China is building its third aircraft carrier in Shanghai is probably no longer a doubt today, as its first blocks have started to appear in the new construction zone at Jiangnan Changxing Shipyard for several months. The type of propulsion system as well as the type catapults (steam or electromagnetic – EMALS) that will be used aboard the vessel remain two unknowns however.

While the Chinese authorities, particularly the Central Military Commission and the Chinese Navy, have yet to reveal any details on current and future PLAN programs, the local industry has recently released some interesting “half-hearted” leaks.

In an article published at the end of January by Jiangnan Changxing shipyard, praise is given to one of its experts, ZHANG Guo Xin (张国 新) , Production Manager of a “Special Project”. The shipyard is a subsidiary of the Chinese naval group CSSC (China State Shipbuilding Corporation), which is also one of the largest shipbuilding sites in the world.

The text, which was quickly pulled from the WeChat account (probably for revealing too many details), indicates that ZHANG has been working on the construction of a “Strategic Product” for almost three years.

And in regards to this “ship” and its peculiarities, the expert and his team started research in three major topics:

* Stator: The stationary portion of an electric generator or motor, especially of an induction motor.

This research work and other achievements led by ZHANG earned him the first 2018 contribution prize from the CSSC group. Among these three research topics put forward by the Chinese shipbuilder, the second one seems to suggest quite clearly that the third Chinese aircraft carrier will use EMALS catapults. The only question concerns the word “TS”, which could actually be the phonetic acronym for “Tán Shè” (弹射), ie “catapulting” in Chinese.

As for the propulsion system, if these “Special Project” and “Strategic Product” mentioned in the article actually represent the new aircraft carrier under construction – which is more than plausible – then the Chinese word 机 炉 舱 (used in the first research project’s description) means that the main and auxiliary machines as well as the boilers are in the same machine room. This seems to be quite characteristic of the conventional propulsion of an aircraft carrier.

It should be noted that the same word had already been used in an article by Xinhua in 2014 to describe the engine room of the aircraft carrier Liaoning, which uses a conventional propulsion system as well.

Of course, all this is only the hypothetical interpretation of an article published by the Chinese shipbuilder, but with the progress of construction of the new aircraft carrier, other elements are expected to emerge shortly, either voluntary or involuntary.

To be continued.
Henri K.