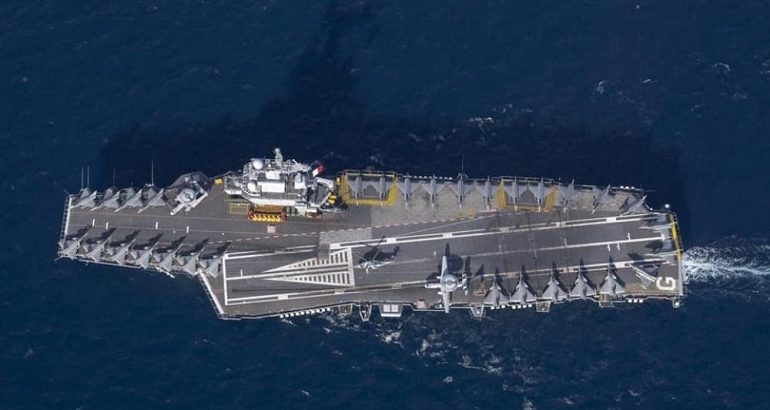 One of the two Dauphin helicopters (acting as plane guard or “Pedro” in French) from the air wing does not appear on these pictures (it was in flight, taking these shots). In addition to the two Dauphin helicopters from 35F squadron (called “flotille” in French) and thirty Rafale Marine from 11F, 12F and 17F squadrons, there are two E-2C Hawkeye airborne surveillance aircraft from 4F squadron, as well as a third helicopter: An NH90 NFH Caiman from 31F or 33F squadron.

It is the first time that the Charles de Gaulle deploys with that many Rafale Marine. Its previous record dates back to its last deployment in late 2016. Following the decommissioning of Super Etendard two summers ago, the French aircraft carrier sailed to the Eastern Mediterranean with a fixed wing air wing consisting solely of Rafale, in all 24 aircraft, equivalent to two squadrons.

This first “all Rafale” deployment confirmed the vessel’s ability to operate that many aircraft of the type without problems. The sailors were then convinced that the air wing could if necessary be increased to thirty Rafale and even more, thanks to the improvements the French aircraft carrier received during the mid-life update (which has just been completed last fall). The capability to accommodate such a large air wing, with rooms to spare for a few more aircraft, confirms the good design of the aeronautical facilities aboard Charles de Gaulle. The carrier was originally designed to be able to implement up to forty aircraft.

For the record, the French carrier strike group (CSG) should leave Toulon naval base by the end of February for a deployment of several months which should take it all the way to Southeast Asia.

In addition to the aircraft carrier and its air wing, the CSG will be as usual composed of escort vessels, a replenishment vessel and a nuclear attack submarine. The Forbin air defense destroyer and the Provence multi-mission frigate will be part of it. The CSG will also integrate, as it has been regularly the case for several years, foreign units. This should be the case of the US destroyer USS Donald Cook and the Spanish frigate Cristobal Colon, which participated in the FANAL Exercise. 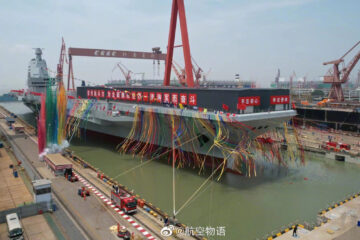