You are at :Home»News»Northrop Grumman progressing towards E-2D navigation system upgrade 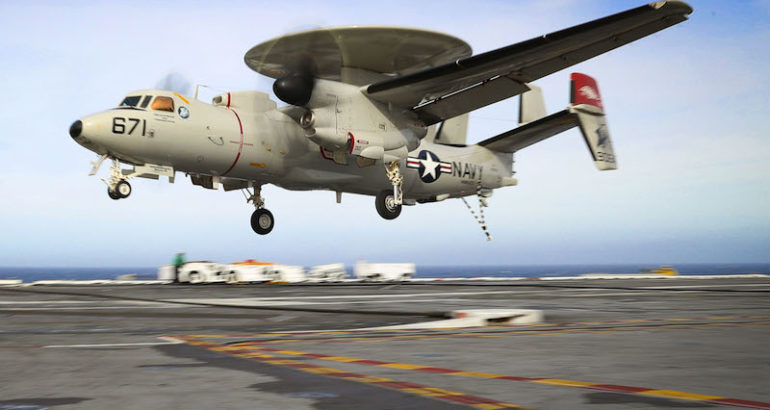 Northrop Grumman has been awarded a $59 million US Air Force contract for the engineering and manufacturing development (EMD) phase of the Embedded Global Positioning System (GPS)/Inertial Navigation System (INS)-Modernization, or EGI-M, technology. The EGI-M will be integrated into multiple platforms across all of the services and exportable versions will be developed for international customers. The lead platforms for EGI-M are USAF F-22 and US Navy E-2D.

The approval to proceed to the EMD phase follows the US Department of Defense’s Milestone B approval in October 2018. During the EMD phase, Northrop Grumman will develop the critical hardware and software design for the EGI-M, build hardware for integration and qualification, generate safety and civil certification documentation, qualify the new EGI-M systems to rigorous military standards, and build production units for platform testing.

Based upon modular and truly open systems architecture, the EGI-M system will support the rapid insertion of new capabilities and adaptability based on unique platform requirements. Additionally, the modernized navigation system will incorporate new generation GPS receivers, which will be capable to securely and accurately transmit the new military signals for space (M-Code).

“This EMD award brings us an important step closer to fielding a modernized navigation system that provides accurate positioning, navigation and timing (PNT) information, even when GPS is denied,” said Dean Ebert, vice president, navigation and positioning systems, Northrop Grumman. “Northrop Grumman is dedicated to ensuring the safety and mission success of our warfighters by providing a resilient assured PNT solution that will allow service members to fly, fight and win in any environment.”

EGI-M technology is designed for compatibility with current systems on legacy aircraft, allowing ease of integration and rapid adoption of new capabilities. EGI-M will also comply with the Federal Aviation Administration’s NextGen air traffic control requirements that aircraft flying at higher altitudes be equipped with Automatic Dependent Surveillance-Broadcast (ADS‑B) Out by January 2020. ADS-B Out transmits information about an aircraft’s altitude, speed and location to ground stations and to other equipped aircraft in the vicinity.

The E-2D Advanced Hawkeye is the latest variant of the E-2 Maritime Patrol Aircraft, replacing the E-2C Hawkeye. It features a state-of-the-art radar with a two-generation leap in capability and upgraded aircraft systems that will improve supportability and increase readiness. The US Navy plans to field an aerial refueling (AR) capable E-2D AHE in 2020, allowing the platform to remain airborne to the limits of the aircrew and airframe endurance.