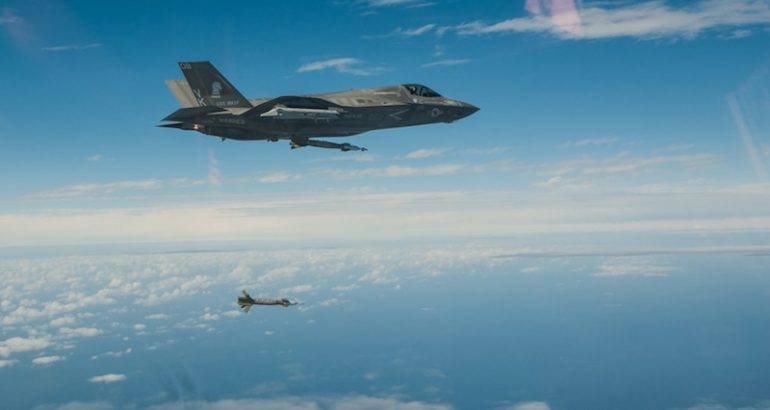 “We achieved mission success by using the full capabilities of the F-35B at sea. We flew sorties in both a clean configuration and a configuration with external pylons and weapons. We conducted these missions by launching from the USS Wasp, engaging role-player adversary aircraft, striking simulated targets with internally and externally mounted precision guided munitions, returning to the Wasp, and recovering via a vertical landing – a niche capability of the F-35B” said Rountree. “This was the first time that this level of training has been performed by an operationally-deployed F-35B detachment with the 31st MEU.”

This operational milestone marks the first time that F-35B aircraft performed strikes with ordnance fully-loaded in the Indo-Pacific region, demonstrating an increase in lethality and integrated amphibious capability, according to Col. Robert Brodie, commanding officer of the 31st MEU.

“The combination of stealth tactics and fully-loaded strike aircraft increases the lethality of the F-35B, enabling greater contribution and combat effectiveness by the Amphibious Ready Group/Marine Expeditionary Unit Team,” said Brodie, a career F/A-18 Hornet pilot. “The formidable and versatile capability of the F-35B provides a premier platform to support the Marine Air-Ground Task Force’s ability to own the fight in the dynamic and evolving Indo-Pacific environment.”

The 31st MEU, the Marine Corps’ only continuously forward-deployed MEU partnering with Wasp ARG, provides a flexible and lethal force ready to perform a wide range of military operations as the premier crisis response force in the Indo-Pacific Region.