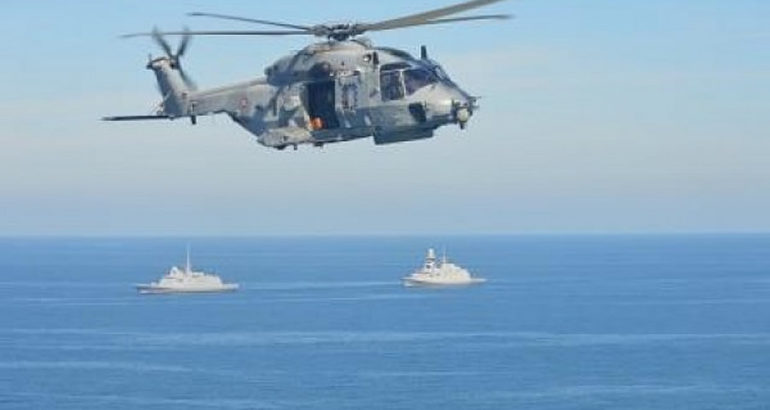 An Italian submarine was tasked with the search and the pursuit of the two frigates for the duration of the exercise.

During this operational training, the two vessels supported by their onboard NH90 NFH helicopters and maritime patrol aircraft were able to demonstrate a high level of interoperability in a wide range of tactical areas, including information systems and communication, tactical data links or the optimized use of their sensors, especially below the surface.

At the end of the exercise the two commanders confirmed the relevance of this collaboration and the mutual operational benefit which resulted from the complex maneuvers and coordinated tactics, conducted by the crews of the two nations. This bilateral cooperation confirms the ability of these two neighboring naval powers to jointly ensure the security of their maritime approaches in a field that requires constant attention and endurance.

FREMM Aquitaine is the first ship of her class. The French Navy has 6 Aquitaine-class FREMM Frigates on order (5 of them have been commissioned to date) plus 2 more that will be specialized for air-defense.

The Italian Navy has 10 Bergamini-class FREMM Frigates on order. 4 of them are configured for ASW missions (Alpino being the last one of these 4 FREMM-ASW). The other six are “General Purpose” frigates with two ships still to be commissioned.