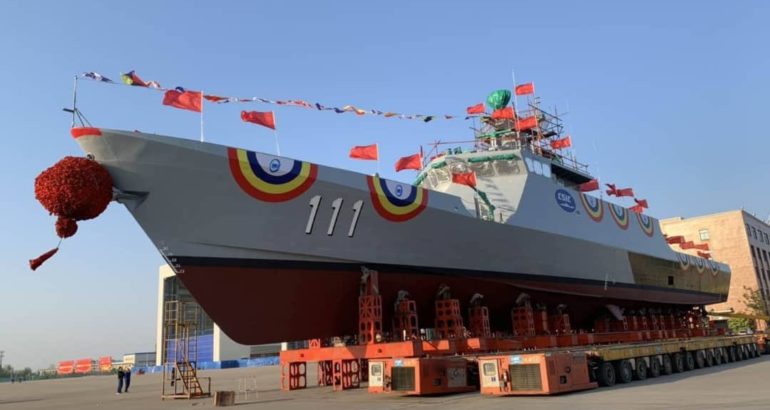 The launch ceremony of the first LMS of the RMN. RMN Picture.

The first Littoral Mission Ship (LMS) for the Royal Malaysian Navy (TLDM or RMN) was named and launched during a ceremony held April 15 at Shuangliu Manufacturer Base, Wuchang Shipbuilding Industrial Group, Wuhan, China.

The first of class vessel was named KERIS. It is a Malay traditional weapon which symbolizes the spirit of heroism, struggle, courage and strength in resisting and repelling enemy attacks. This spirit will be owned by a future LMS crew who will start training in Shanghai soon.

The acquisition contract of the LMS was signed on 23 March 17 between the Malaysian Ministry of Defense and Boustead in collaboration with CSOC, China. LMS is one of the five classes of ships in the 15to5 Fleet Transformation Program. LMS construction is characterized by “fit for purpose”. This coastal patrol ship is a modular concept that is capable of being configured for specific missions depending on the needs

This vessel will be the first naval vessel built in the People’s Republic of China to be operated by the Royal Malaysian Navy. It also represents the pragmatic approach by the Government of Malaysia and the navy in term of their willingness to diversify our supply base to wherever that best meet our requirements.

KERIS will undergo various trials port-side and at sea before
its hand over to the RMN which is set for December 2019.