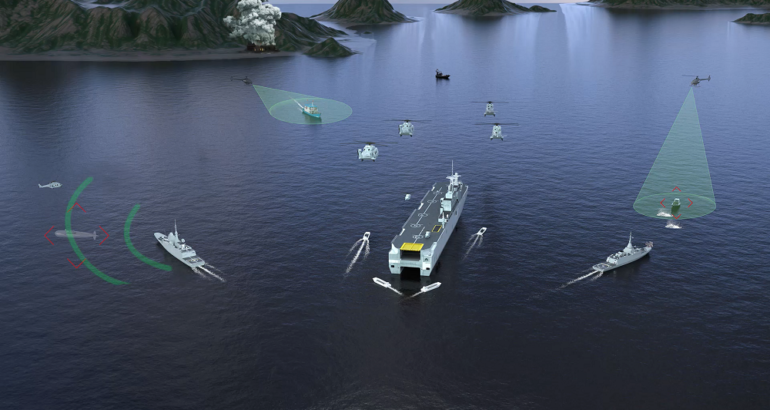 Naval Group will exhibit for the first time at FAMEX, the Aerospace Mexico Fair, held from April 24 to 27, 2019 at the main military air base of the country, located in Santa Lucia. Naval News took the opportunity to sit down with Naval Group's Olivier Michel, Vice President Sales Latin America, and Nicolas Viala, Corporate Sales Director Latin America.

The two executives outline to us what Europe’s leading defense shipbuilding group’s ambitions are in the region and in Mexico, ahead of the event.

Naval News – With the success in Argentina and your participations to Colombiamar, LAAD and now FAMEX, is 2019 the year of Latin America for Naval Group ?

Olivier Michel, Naval Group: It is true that with the contract in Argentina  for 4 OPV, 2019started well for Naval Group in the region!

We have been present on the Latin American continent for decades, with the Scorpene in Chile and Brazil and other contracts, but it is true that the last couple of years have seen a renewed activity. Since 2014, many projects have been launched for both surface ships and submarines.

Many Latin American countries are maritime countries, with huge national waters and natural resources to secure. Besides, some countries, also want to develop their navies to take part to joint operations to assert their status on the regional and international stages. It is logical for them to replace their ageing fleets and to look into acquiring new capabilities and we want support them in these long term processes.

Naval News – Do you intend to develop local partnerships in the region to  build locally ?

Olivier Michel, Naval Group: Of course, because we understand how important local content is for our clients and their countries.

Acquiring new naval capabilities, being modernizing the existing fleet or buying new surface ships or submarines, is always a substantial financial investment for a country, with a strong impact on its sovereignty. But, it is also an amazing opportunity for the country to develop its national industry and to create employment.

Naval Group has a unique experience of successful technology transfers for the construction of both surface ships and submarines. We can propose transfers of technology from design and production, to infrastructures and through-life support. This is a key and unique skill of our company that was a deal maker in many cases, like for the Future Submarine Program in Australia or the ProSub Program in Brazil.

We want to stay close to our customers, this is why we already have 3 Regional Representative Offices in Latin America andwe are looking into opening news ones. Their role is of course to be close to our client to nurture the relationship, but also to develop our partnerships with the local naval defence industries. In each country, we are looking into covering the full spectrum of the bilateral cooperation, from scientific research and university collaboration up to local industry.

Naval News – Latin America is seen as a stable and at peace continent, at least in terms of international conflicts. Naval Group is well known for its high-intensity solutions so what can you propose to those countries ?

Olivier Michel, Naval Group: A lot! It is true that Naval Group’s know-how steams from its partnership with the French Navy which is one of the most operational navy in the world. However, we can provide lots of solutions for all kind of needs.

For example, the Gowind family, our best seller,is a truly multi-role ship which can be adapted to respond to the specific needs of each navy and can accomplish all kind of missions such as securing EEZ and maritime routes, fighting against piracy or drug trafficking, protecting offshore oil platforms while retaining the advantages of a military design such as stealth and robustness.

In France, when we think about the Navy, we often think about nuclear submarines or operational missions such as in the Eastern Mediterranean. But the Navy has a lot of other missions. For example, our Mistral-class LHD, most usually used as a helicopter-carrier and command center,  was a tremendous help in the French West Indies after the Irma Hurricane in 2017 as it allowed to transport troops and tons of supplies, while providing a hospital and shelter for the population.

Nicolas Viala, Naval Group: Latin America is often confronted to natural disasters so this is one of the solutions we will present at FAMEX in Mexico next week.

Naval News – Latin America is seen as a stable and at peace continent, at least in terms of international conflicts. Naval Group is well known for its high-intensity solutions so what can you propose to those countries ?

Olivier Michel, Naval Group: I understand it might be surprising, but in aeronautic, you still have “nautic”!

We are looking forward to participate for the first time to FAMEX. Mexico is known for its aeronautical Industry and its aeronautical operations based on the leading role of SEDENA and SEMAR and, as all major exhibitions, FAMEX is good opportunity to meet all our local or regional contacts and customers as well as the industrial players with whom we maintain relationships.

We will focus on our unique expertise in terms of naval aviation, acquired through our close relationship with the French Navy on the design, built and through-life support of the Charles-de-Gaulle aircraft carrier and of the French Mistral-class LHD.

As Nicolas told you, we will present the Mistral-class LHD as well as services and equipment for naval aviation forces. Besides, Latin American forces are always more interested in the integration of helicopters and UAV on-board naval platforms.We can respond to their needs with proven solutions.

Nicolas Viala, Naval Group: FAMEX will also be an opportunity for us to prepare other upcoming events in the country, such as our Naval Day or the port-of-call of the Mission Jeanne d’Arc with a LHD and and Lafayette frigate mid-june.

Naval News – Besides Mexico, do you have other upcoming events in the region?

Nicolas Viala, Naval Group: Yes! The main ones will be SITDEF in Peru in May, and the Mission Jeanne d’Arc but this time in early June in Cartagena, and before that in May in Brazil.