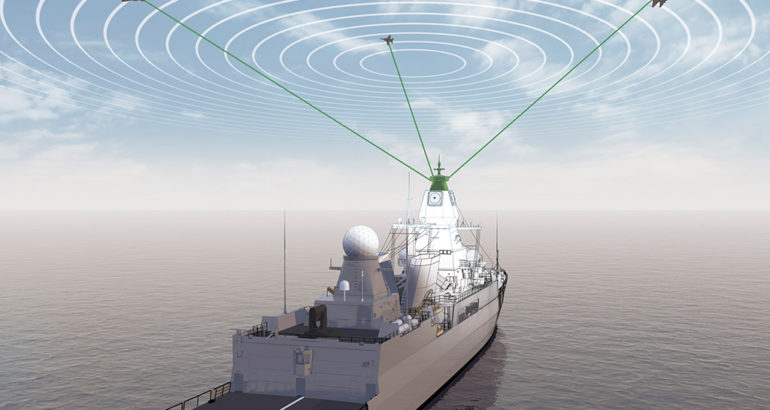 HENSOLDT new NESIS 4000 is based on the latest AESA radar technology, allowing for better performance and ship survivability.

HENSOLDT new NESIS 4000 is based on the latest AESA radar technology, allowing for better performance and ship survivability.

HENSOLDT, the leading independent sensor provider, has developed a new product which leads the next generation of military identification (IFF, identification-friend-or-foe) systems on modern warships. NESIS 4000 capitalizes on the latest AESA (= Active Electronically Scanning Array) radar technology giving it superior performance compared to conventional systems. Due to this technology the radar beam can be steered electronically so that the system does not require a mechanically rotating antenna on top of the ship’s mast. The first system will be delivered to the launching customer by end of this year.

The avoidance of a rotating antenna at the highest point of a ship by using a non-rotating, ring-shape fixed-array antenna in a lower part of the ship’s integrated mast reduces the radar cross-section and infrared signature of the vessel by far. Therefore, the new technology allows for improved survivability of surface vessels and cost-saving flexibility in ship-design. In addition, the AESA technology increases radar performance and reduces significantly the update rates. Compared to conventional systems, targets and eventual threats can be identified much faster and the range in a 360° area around the ship is widened to a 200 NM radius.

HENSOLDT supplies customers all over the world with air traffic control and identification systems for military and civilian applications. Its MSSR 2000 I secondary radar is deployed for military friend-or-foe identification by the naval forces of Germany, France, UK, Australia, Chile, Norway and Finland.