A keel laying ceremony took place today at the Peene shipyard in Wolgast for the first of five K130 Batch II Corvettes for the German Navy (Deutsche Marine). The Corvette is named "Köln".

Germany approved the procurement of five additional Braunschweig-class (K-130) corvettes in June 2017 to answer new NATO requirements. The second batch of corvettes will be named Köln, Emden, Karlsruhe, Augsburg, and Lübeck. Atlas Elektronik and Thales Deutschland have been contracted to deliver the combat system for the five new K130 corvettes. The production started earlier this year.

The five new corvettes will be built by a joint venture of three shipbuilding companies: Lürssen Werft, ThyssenKrupp Marine Systems and German Naval Yards. Lürssen will build the foredeck of the “Cologne” in its shipyard at Lemwerder near Bremen, while the rear will be built at the Wolgaster Peene shipyard. These two large sections will then be assembled and equipped at the Thyssen shipyard Blohm & Voss in Hamburg. In Wolgast, the rear vessels of the remaining four new corvettes are also being built.

Since its commissioning in 2008-2013, the first five ships in the class have become proven workhorses of the German naval forces. On the one hand, one of the corvettes for the UNIFIL stabilization mission in the Mediterranean Sea off the coast of Lebanon has been in use virtually since 2012. On the other hand, the small, manoeuvrable ships with a sea endurance of up to seven days are specialists for national and alliance defense missions in the Baltic Sea, where they regularly practice with NATO and EU partners.

The German fleet has recently tested the newly-developed concepts of intensive use and multi-crew model with the class K 130, for which the class 125 frigates are designed and of which the first will be put into service this year.

With the procurement of these new ships, the Navy will also eliminate the obsolescence of the corvettes, which are already introduced into the fleet. 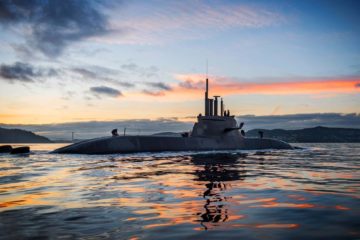 Martin Manaranche 15 Jun 2021
On Saturday, June 12, 2021, the submarine "U 35", which belongs to the 1st Submarine Squadron, left its home port of Eckernförde and headed for the Mediterranean to take part in the EU operation "Irini".

Xavier Vavasseur 22 May 2021
The German Navy (Deutsche Marine) commissioned its third F125 Baden-Württemberg-class Frigate on Monday, May 17, 2021. The "Sachsen-Anhalt" joined the German fleet during a ceremony at Naval Base Heppenser Groden in Wilhelmshaven.