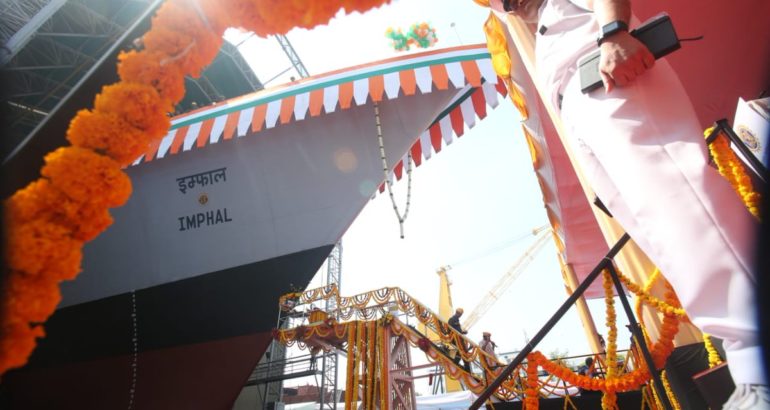 This launch marks yet another significant milestone in the annals of the indigenous warship design and construction programme of India. With a launch weight of 3,037 tonnes, the vessel made its first contact with water at 1220 Hours with full fanfare during the launching ceremony.

The Project 15B / Visakhapatnam-class is the latest destroyer design currently under construction for the Indian Navy. These ships have been designed indigenously by the Indian Navy’s Directorate of Naval Design, New Delhi. Each ship spans 163 metres in length and 17.4 metres at beam and displaces 7,300 tonnes. These ships will be propelled by four gas turbines to achieve speed in excess of 30 knots.

According to the Indian Navy, the P15B destroyers incorporate new design concepts for improved survivability, sea keeping, stealth and manoeuvrability. Enhanced stealth features have been achieved through shaping of hull and use of radar transparent deck fittings which make these ships difficult to detect. P15B ships will be equipped to carry and operate two multi-role helicopters.

The Visakhapatnam-class shares several sensor and weapon systems with its preceding design, the Kolkata-class (Project 15A) of destroyers: The IAI EL/M-2248 MF-STAR S-band AESA multi-function radar, Thales LW-08 D-band air search radar, BEL HUMSA-NG bow sonar are fitted on both classes. Like Project 15A, the Project 15B will be fitted with 32x Barak 8 surface to air missiles (launched from VLS cells) as well as 16 BrahMos anti-ship and land-attack cruise missiles.

One notable difference between the two classes will be the main gun: While the Kolkata-class is fitted with a 76mm main gun, the Visakhapatnam-class is set to receive a 127mm main gun.

The first ship of the class, Visakhapatnam was launched in April 2015 and is set the be commissioned in 2021. It was followed by the future INS Mormugao which was launched in September 2016. The fourth and final vessel of the class will be Porbandar which is set to be launched next year. All four destroyers are being built at MDL.