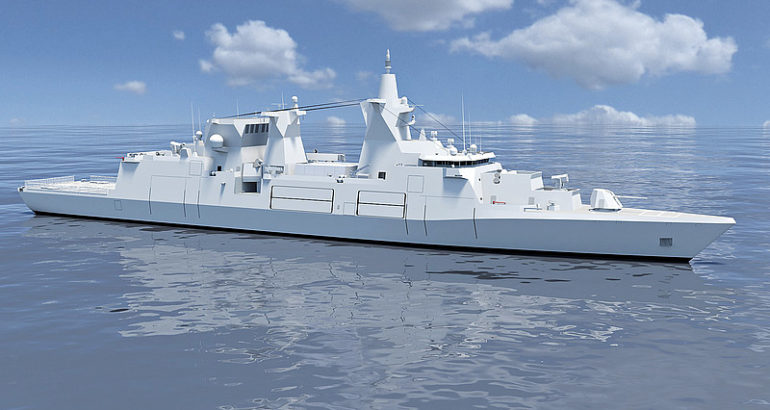 Mehrzweckkampfschiff 180 or MKS 180 Concept graphic of the Bundeswehr

In a news article recently published on its website and titled "MKS 180: The K Stands for Kombat", the German Navy (Deutsche Marine) outlines the future capabilities of its next class of surface combatant: The MKS 180.

The German Navy expects the Multi-purpose Combat Ship 180 (MehrzweckKampfSchiff ) as an “all-rounder”. The future vessel will be fit for a wide range of tasks thanks to its mission modules – with superiority in full fledged naval warfare at the extreme end of the spectrum.

This modularity requirement results from the Bundeswehr’s return of experience in peace-keeing operations and crisis management, some of which have lasted for years, as well as the requirements for both a national and European defence. The MKS180 should be able to patrol large areas at sea for long duration, anywhere around the world. It should be capable to enforce embargoes and, if necessary, evacuate German citizens during crisis situations. It should also be capable of high intensity naval combat against surface and submarine vessels. So far, a single class of ship was not capable to conduct such a wide range of missions.

The basic version of the MKS 180 is already a full-fledged combat ship. Interchangeable components supplement this core capability and specializes the vessel for specific roles. Two such mission modules are currently planned: an anti-submarine warfare (ASW) module and a custody module.

Flexibility thanks to modular system

The ASW mission module turns the MKS180 into a dedicated submarine hunter. With onboard helicopters and their own sonars – in conjunction with the sensors of allied maritime patrol aircraft and submarines – the ship can secure a large area against submarine threats.

The custody module turns the MKS into a floating base for anti-piracy missions. Multiple cell rooms allow persons to be temporarily detained; An additional sanitary station makes medical examinations possible under quarantine conditions.

In addition to these two, the German Navy has plans for other modules. One of them is equipped with a diving chamber and other special equipment for mine warfare.

The accommodation of the mission modules is divided into three areas in the ship. A so-called flex deck is located below the flight deck at the stern. Using an external crane, it can be equipped with a hatch from the top. Two additional flex decks are located approximately halfway along the length of the superstructure and can be accessed by an onboard multi-purpose container crane.

The German Navy demands from the future shipbuilder that the replacement and commissioning of the modules can be carried out as quickly as possible and anywhere, without interfering with the ship’s structure and without a shipyard. In addition, the modules must withstand the climatic and oceanographic conditions that prevail in their respective field of application. Thus the MKS will be able to travel in the tropics as well as possess an ice reinforced hull to navigate polar waters.

The modularity of the MKS has several advantages: Unused mission modules can be stored and maintained independently of the ship. The modules do not have to be procured for each ship and can also be purchased independently, any time. In the case of changes in operating conditions and advances in technology, only the module may need to be modernized. And the standardized interfaces on board is designed to be compatible with new and future modules.

The size of the MKS is impressive when compared to existing vessels of the German Navy. That’s because they need, among other things, enough space to accommodate the different modules. The naval architects calculated a length of around 155 meters for the MKS and a displacement of up to 9,000 tons. For comparison: The frigates of the Baden-Württemberg-class are a good five meters shorter and nearly 2,000 tons lighter. And even these frigates are almost twice as large as the frigates of the Bremen-class.

Compared to the frigates of the Baden-Württemberg-class, which the German Navy will put into service from this year on, the MKS will adopt some features – above all automation and low maintenance of the technical equipment as well as the multi-crew concept.

This will also allow these new ships to remain operational (ready to be deployed at sea) for up to two years, while the crew of around 110 will rotate every four months. In addition to this regular crew, up to 70 additional sailors can be accommodated in the mission modules.