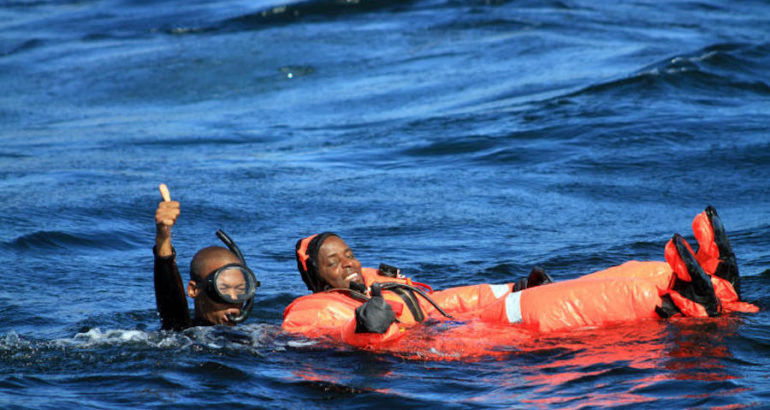 Among others means used to escape from a stricken submarine, normally practised at an average depth of about 100m, is the tower escape system. This system allows for two members at a time to climb into the conning tower of the submarine, wait for the tower to be flooded and then rise to the surface. The tower is then refilled with air, ready for the next two escapees.

Recently, a South African developed and produced prototype system, that enhances the originally fitted system, was tested onboard the SA Navy SAS MANTHATISI submarine. The successful test was conducted from a depth of 20m. Project TESS, an acronym for submarine Tower Escape Safety System, was initiated by the South African Navy in 2009 in conjunction with ARMSCOR DoD , the Institute of Maritime Technology and the Council for Scientific and Industrial Research (CSIR).

The new system sees a special mechanical rail system fitted on the inside of the tower. Each submariner hooks on to this rail system, below each other. As the tower floods, the rail system keeps the submariners fixed in position, despite the air in their suits. The submariners are released by means of a hold-trigger and release mechanism that is automated upon opening the tower upper hatch. This system works even if the submariners are unconscious. The entire procedure takes approximately three to ten seconds for both submariners to surface at a depth of ten metres. The escape cycle is repeated until such time as the complete crew has escaped.

The South African Military Health Service Institute for Maritime Medicine also played an extensive role in the planning phase as well as providing medical support due to the risks associated with quick ascents, such as barotrauma (decompression sickness), hypothermia or carbon monoxide poisoning. Members of the SA Navy divers were close at hand to assist the members as they reached the surface.

It is envisaged that the TESS will eventually be incorporated into all SA Navy submarines. The successful completion of the Tower Escape will also be an additional requirement to qualify as a submariner.