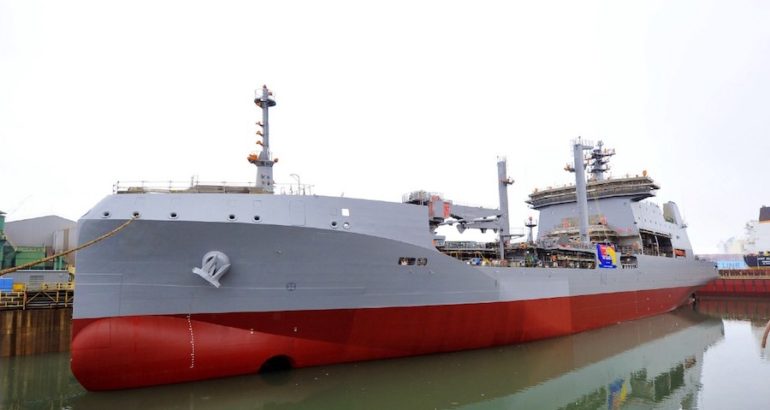 HMNZS Aotearoa on the water for the first time following her launch at the Hyundai Heavy Industries shipyard in Ulsan, South Korea (Credit: RNZN)

At a launch ceremony this week, the Royal New Zealand Navy’s (RNZN) first purpose-built ship in 10 years, the HMNZS Aotearoa, finally found herself in her natural environment only eight months after her keel was laid in a South Korean shipyard, the RNZN press office announced on April 25.

The HMNZS Aotearoa auxiliary ship was constructed at the Hyundai Heavy Industries dry dock under a USD327 million contract. In 2020, it will replace the Navy’s latest replenishment oiler, the HMNZS Endeavour, which was decommissioned in 2017.

“Seeing a ship of this size and capability on the water nearing full completion is a really exciting time for our Navy,” said the Chief of Navy, Rear Admiral David Proctor, during his speech.

“Aotearoa will provide us with a world-class maritime sustainment capability. She is a ship that will carry our nation’s name with pride to all corners of the world as we advance New Zealand’s interests from the sea.”

The HMNZS Aotearoa now begins six months of fit out before her formal naming ceremony in October in Ulsan, South Korea, attended by the Governor-General of New Zealand and the ship sponsor, Dame Patsy Reddy. The Commissioning of the ship will take place at the Devonport Naval Base in Auckland in early 2020.