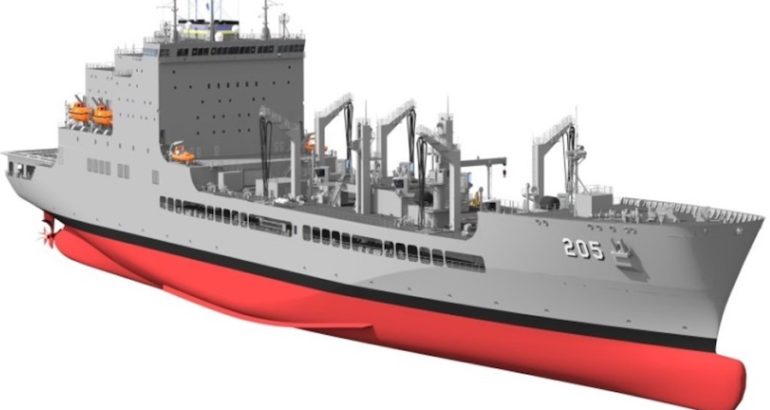 The keel for the future USNS John Lewis (T-AO 205), the US Navy's first John Lewis-class fleet replenishment oiler, was ceremonially laid at General Dynamics-National Steel and Shipbuilding Company May 13.

The keel for the future USNS John Lewis (T-AO 205), the US Navy’s first John Lewis-class fleet replenishment oiler, was ceremonially laid at General Dynamics-National Steel and Shipbuilding Company May 13.

A keel laying is the ceremonial recognition of the start of a ship’s construction. It is the joining together of a ship’s modular components and the authentication or etching of an honoree’s initials into a ceremonial keel plate. The ship’s namesake, U.S. Representative John Lewis, and the ship’s sponsor, actress Alfre Woodard, etched their initials into the keel plate.

“We’re honored to have Representative Lewis and Ms. Woodard with us today as we lay the foundation for recapitalizing our nation’s critical fuel-replenishment-at-sea capabilities,” said Mike Kosar, Support Ships, Boats and Craft program manager, Program Executive Office (PEO) Ships. “These ships are steadfast, reliable and allow our warships to defend our freedoms for which Representative Lewis has dedicated his life to protecting.”

The John Lewis-class ships are based on commercial design standards and will recapitalize the current T-AO 187-class fleet replenishment oilers to provide underway replenishment of fuel to U.S. Navy ships at sea. These ships are part of the Navy’s Combat Logistics Force.

John Lewis will be operated by the Navy’s Military Sealift Command and is the first ship named after the civil rights leader and Presidential Medal of Freedom recipient. Construction of John Lewis began in September 2018, with delivery planned in late 2020.

As one of the Defense Department’s largest acquisition organizations, PEO Ships is responsible for executing the development and procurement of all destroyers, amphibious ships, sealift ships, support ships, boats and craft.