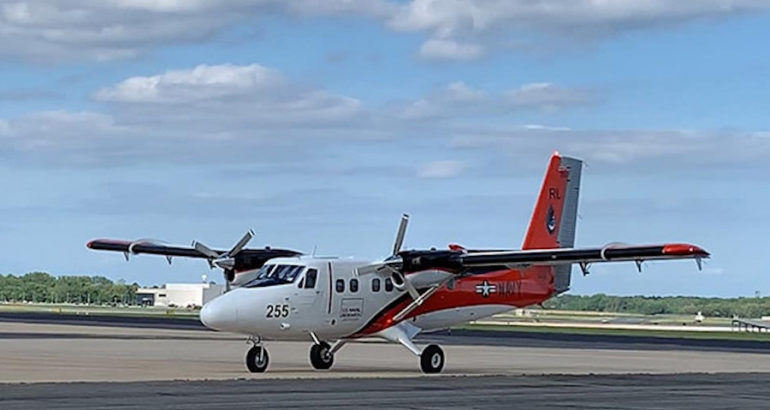 The U.S. Naval Research Laboratory (NRL) and the Navy's premier science and technology research squadron, Scientific Development Squadron ONE (VXS-1), unveiled the UV-18 "Twin Otter" as the newest addition to the squadron's unique fleet of aircraft research platforms, May 11.

The UV-18 is the military equivalent of the DeHavilland DHC-6 — a high-wing, unpressurized twin engine turbine powered aircraft with fixed tricycle landing gear.

“The Twin Otter is a safe, highly maneuverable and extremely versatile aircraft,” said Cmdr. Erik Thomas, commanding officer for VXS-1. “The fact that it is unpressurized simplifies modifications and will accelerate our ability to get projects airborne for the Naval Research Enterprise.”

The aircraft compliments the VXS-1 “Warlocks” fleet by providing an affordable and stable research platform with slow flight capabilities and an operational payload of up to 3,000 pounds.

The performance capabilities of the UV-18 aircraft offer customers a slow flight speed of 85 mph, a maximum cruise speed of 190 mph, a nominal service ceiling of 13,000 feet (higher with supplemental oxygen), and a six-hour flight duration dependent on payload and flight configuration.

In addition to the UV-18, VXS-1 operates a varying range of aircraft that include three NP-3C and P-3C Orions, an RC-12 King Air, and 12 TigerShark Unmanned Aircraft Systems.

The fleet of unique squadron aircraft are operated and maintained by the men and women of VXS-1 and contain an S&T framework to provide power, Ethernet, and GPS feeds as required for temporary project installations and to quickly conduct airborne research. The squadron has a self-contained configuration and project shop to assist prospective customers with rack designs, gear installations and flight clearances.

“Using our squadron’s aircraft, scientists and engineers can install and test the latest technology they are developing in an operational environment anywhere in the world. We truly turn their ideas into reality,” Thomas said.

SNA 2020: Four Nations to Be Protected with Lockheed Martin’s Next Generation SPY-7 Radar