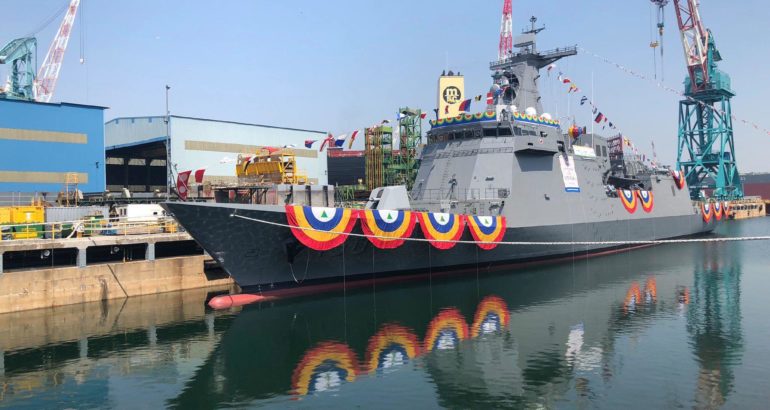 HHI Launched the ‘Jose Rizal’ Frigate for the Philippines Navy

The first of two frigates built for the Philippines Navy was launched by Hyundai Heavy Industries in South Korea.

The contract for the construction of two light frigates was signed between the Philippines and HHI in October 2016. The contract was signed following the victory of HHI in an international tender. The tender purchase value of the two ships was determined to be 15.744571584 billion Philippine pesos (about $ 311 million). This price point is for the ship only (weapons systems not included). The lead ship ‘Jose Rizal’ should be transferred to the Philippine fleet in 2020.

According to the shipyard, the frigates for the Philippines are based on an HHI design, which is a smaller version of the Incheon frigates (FFX-I) being built for the South Korean fleet. The Philippine frigate will have a standard displacement of about 2,600 tons and a length of 107 meters. The diesel main power plant under the CODAD scheme should provide a full speed of 25 knots, a cruising range of 4500 nautical miles at a speed of 15 knots.

The specific composition of the armament and equipment of the ship was not disclosed, but based on the image released by HHI, the Philippine frigate will have four anti-ship missile launchers (presumably, for South Korean SSM-700K Haeseong / C-Star by LIG Nex1), two SIMBAD-RC short range SAM system by MBDA, a 76-mm main gun, one 30mm secondary gun, two 324-mm three-tube torpedo launchers (presumably for K745 Chung Sang Eo / Blue Shark torpedoes by LIG Nex1). It will be fitted for but not with an 8x cell VLS for surface to air missiles. The ship has an helicopter deck and hangar to accommodate a Leonardo AW159 Lynx Wildcat helicopter (two such helicopters have been ordered for the Navy of the Philippines). Most of the sensor and electronic suites will be provided by Thales.