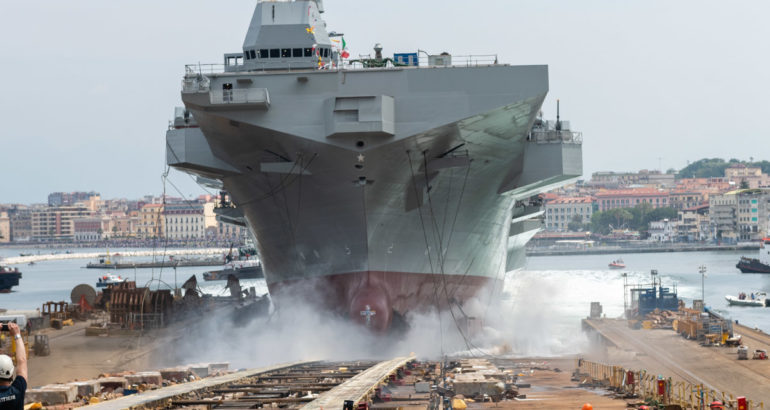 The launching ceremony of the multipurpose amphibious unit (LHD or Landing Helicopter Dock) “Trieste” took place today at the Fincantieri shipyard in Castellammare di Stabia, in the presence of the President of the Italian Republic Sergio Mattarella.

This multirole and multipurpose amphibious vessel has been designed since the beginning as a flexible, multi-purpose by design, modular unit with a low environmental impact. It is a Landing Helicopter Dock (LHD) capable of deploying aircraft and amphibious vehicles and equipment, relying on a flight deck and a floodable basin located on the stern of the ship.

The new unit will be delivered in 2022 and falls within the naval program of the maritime capability of Defence, approved by the Italian Government and Parliament and started in May 2015 (“Naval Law”).

The unit “Trieste” will be classified by RINA Services pursuant to international conventions for the prevention of pollution regarding traditional aspects – like those addressed by the MARPOL Convention, as well as those not yet mandatory, like the ones covered by the Hong Kong Convention introducing the “Green Passport” concept.

The unit will be approx. 245 meters long with a maximum speed of 25 knots. It will be equipped with a COmbined Diesel eLectric Or Gas (CODLOG) propulsion system and an additional electric propulsion system to be used for low speed sailing, in line with the Italian Navy’s environmental policy (“Green Fleet”).

Thanks to her characteristics in terms of construction and weapon systems, the LHD “Trieste” will be able to project – in crisis areas – the landing force of the Italian Navy and support the Defence national capability projection from the sea, as well as to ensure the strategic transport of vehicles, personnel and equipment, and to support the Civil Protection in providing assistance to countries and populations in case of natural disasters, thanks to her capability to provide drinking water, power supply, healthcare and medical support.

The Unit has also been conceived to carry out command and control functions in case of emergencies at sea, evacuation of nationals and humanitarian assistance operations.

With over 1,000 sleeping accommodations, the new LHD will feature a 230-metre long helicopter flight deck, allowing the operation of a battalion consisting of 600 personnel, and a dock-garage for 1,200 linear metres of wheeled and tracked vehicles, both civilian and military.

The floodable dock – 50 metres long and 15 metres wide – will enable the ship to deploy the most technically advanced amphibious equipment and vehicles of EU and NATO Navies.

The different areas of cargo securing are accessible through cranes, stern and side ramps, and cargo handling will be managed by internal ramps and elevators. A fully equipped hospital will also be available onboard, complete with operating rooms, radiology and analysis rooms, a dentist’s office, and patient rooms capable of hosting 27 seriously injured patients (further admissions are possible through duly equipped container modules)