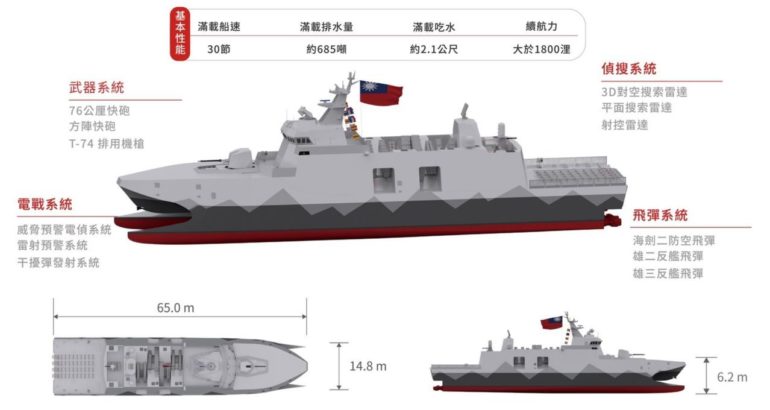 Taiwan started construction on three new catamaran corvettes and four mine layers in an effort to boost its naval forces.

A keel laying ceremony was held at the Lung Teh Shipbuilding Co. on May 24, 2019 for three catamarans corvette of the improved Tuo Jiang II design (a version featuring enhanced air defense) and four mine-laying ships of the Min Jiang class (with an automated system for laying mines).

The ceremony took place in presence of the President of the Republic of China (Taiwan), Tsai Inwen.

On December 4, 2018, Taiwanese media confirmed that Lung Teh Shipbuilding won a tender for the construction of 11 improved corvettes. Taiwanese media have dubbed these catamaran corvettes as “aircraft carrier killers”, referencing to the PLA Navy growing carrier force. They have a displacement of 680 tonnes and a top speed of 45 knots. They are fitted with eight subsonic Hsiung Feng-II and eight supersonic Hisung Feng-III anti-ship missiles.

The first of three corvettes should be introduced into the Taiwanese fleet by 2025, and the first of four minelayers by 2021.