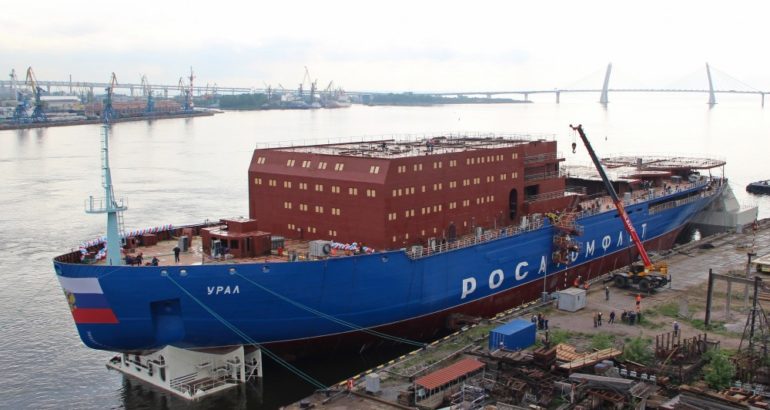 The Baltic Shipyard in St Petersburg launched the third Project 22220 (LC-60Ya) nuclear-powered icebreaker "Ural" on May 25, 2019.

The Ural was launched with its two RITM-200 reactors already installed and most of its electric propulsion system in place.

One in service, the three Project 22220 (also referred to as LK-60Ya) will be the largest and most powerful icebreakers ever constructed. They have a displacement of 33,450 tons and a length of 173 meters.

Project 22220 ships will be equipped with two RITM-200 nuclear reactors, with a thermal capacity of 175 MW each. The propulsion power of this class of ships will be 60 MW which is why this class is sometimes referred as LK-60. The icebreakers have been classified by the Russian Maritime Register of Shipping (RMRS) as the ice class, Icebreaker9. The maximum icebreaking capability of project 22220 vessels is 3.0 m (9.8 ft). The vessels are intended for the Northern Sea Route along the Russian Arctic coast.

During the launch ceremony of “Ural”, the Deputy Chairman of the Government of the Russian Federation stated that “two more ships of the series are scheduled for construction at the Baltic Shipyard.” The head of Rosatom State Corporation, Aleksey Likhachev, also stated in his speech that a decision had already been made to finance two more nuclear icebreakers of this type.