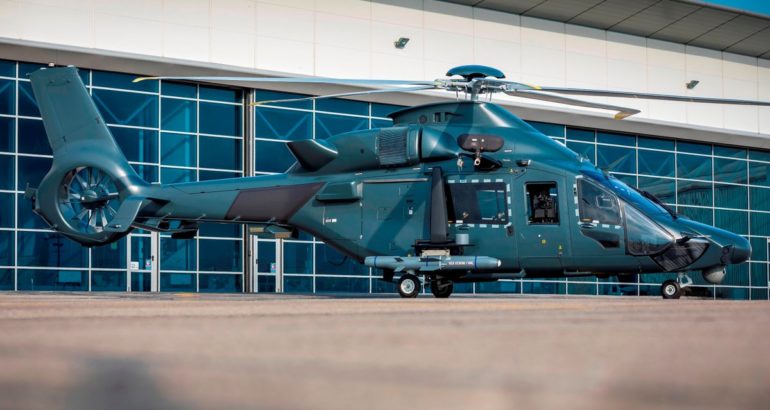 French Minister of the Armed Forces, Florence Parly, today announced that the future Light Joint Helicopter (HIL program) of the French military will be named "Guepard" (Cheetah). She also announced that its procurement will be accelerated.

The announcement came as Parly was visiting the Airbus Helicopter plan in Marignane near Marseilles. The HIL (for Hélicoptère Interarmées Léger) program calls for the procurement of 169 Guepard helicopters for the French Army, Air Force and Navy.

With the speeding up of the procurement process, the first deliveries are set for 2026 (compared to 2028 as previously planned).

Based on the H160 next gen helicopter design by Airbus Helicopters, the Guepard HIL is set to replace 5 types of helicopters currently in services with the 3 French military services: The Gazelle of the army (armée de terre), the Fennec of the air force (armée de l’air) and the Alouette III, Dauphin and Panther of the navy (marine nationale).

The H160, the latest addition to Airbus Helicopters’ civil lineup, was chosen in 2017 to be militarized and meet the needs of the French armed forces. The single fleet concept will pool development costs between the three services. It will also make it possible to optimize support by benefiting from economies of scale, for example on spare parts stocks. The early withdrawal of ageing helicopter fleets will generate savings of the order of one hundred million euros in terms of operational maintenance.

Thanks to its modularity and versatility, the Guepard will fulfill a wide range of missions: armed reconnaissance, fire support, infiltration of special forces and MEDEVAC for the army, anti-ship, naval protection and maritime rescue for the navy; airspace protection, search and rescue, deep action or intelligence missions for the air force.

The H160 is a 6 tons class helicopter capable of speeds of 160 knots. It can carry 12 passengers at distances of up to 120 nautical miles. According to Airbus Helicopters, the H160 features the noise-reducing and performance-enhancing “Blue Edge” main rotor designed to increase the lift capacity by 100 kg and lower noise signature by 50% (3 dB). Military use is intrinsic in the H160 design such as a strengthened landing gear and anti-corrosion for naval operations.

For anti-surface warfare (ASuW), the Guepard will be fitted with MBDA’s Sea Venom/ANL anti-ship missiles.

“We are proud that the HIL is considered a strategic programme. I would like to thank the Ministry, the French Defence Procurement Agency DGA and the armed forces for their trust and for the close collaboration which helped create the conditions for the programme to be brought forward within the framework of the current military budget law. This will make it possible to speed up the replacement of the older generation of aircraft, while optimising the support and availability of the French State’s helicopter fleet. Our teams are committed to delivering an aircraft in 2026 that meets the needs of the French armed forces in terms of availability, performance and capability, thus enabling it to rapidly become the new benchmark on the world’s medium-lift military helicopter market.”

Bruno Even, CEO of Airbus Helicopters